Graham in SC: Scalia Loss Should Be 'Wakeup Call' For Republicans 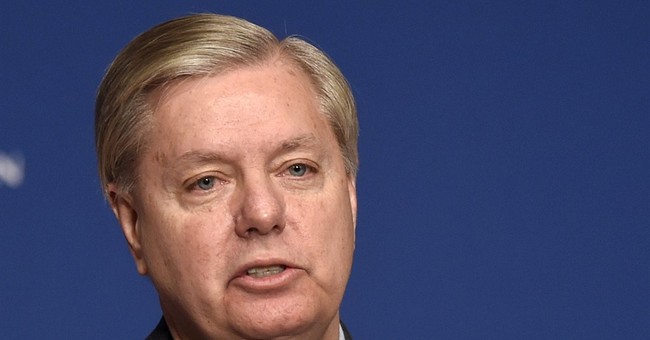 GREENVILLE, S.C. - The passing of Supreme Court Justice Antonin Scalia on Saturday has shaken conservatives in Washington. Scalia was a larger than life, contagious personality who fought to defend the Constitution to his last. All of the 2016 presidential candidates have released statements to recognize his incredible record on the highest bench in the nation.

Sen. Lindsey Graham (R-SC) was in the media filing center ahead of Saturday’s GOP debate in Greenville, SC to chat with some of the press before the anticipated event. Graham, who dropped out of the 2016 race weeks ago, has since endorsed former Gov. Jeb Bush (R-FL).

Graham didn’t just chat about the campaign cycle, however. Journalists asked him to weigh in on the now wide open Supreme Court. Can President Obama get a new justice approved before he leaves office? they wondered.

“If he can’t find a consensus choice,” Graham insisted, “it won’t happen.”

The senator indicated he is still bitter about Obama ushering in the rules change to a simple majority pick for appellate judges. That move, Graham said, “broke trust with him.” He went even further, calling it a “breach of power.”

“This should be wake up call for Republicans,” Graham said. “If you can’t win the White House, then this appointment is going to be made by a Democrat.”

He doesn’t trust Trump to appoint a conservative and he called Ted Cruz “unelectable.”

“Wake up and vote for someone who can win,” he emphasized.

If a Democrat does the win the White House, presumably frontrunner Hillary Clinton, Graham said he could find a way to compromise.

“If Hillary wins and picks a qualified candidate I’d vote for them,” he said.