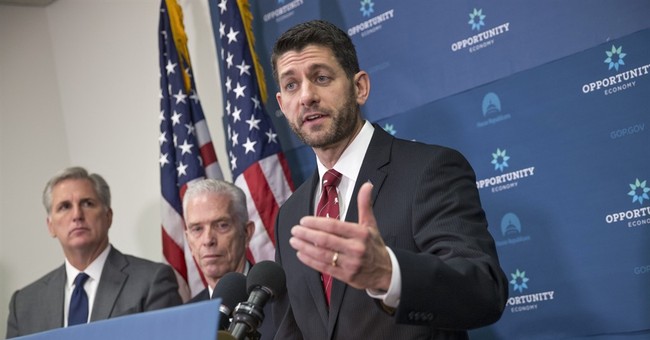 Editor's Note: An earlier version of this article reported that Speaker Ryan gave his first major policy address on Wednesday. The following speech was actually given Tuesday during a press conference. Ryan will offer his major policy speech on Thursday. We apologize for the error.

House Speaker Paul Ryan addressed the press Tuesday offering some insight on Congress' upcoming agenda. One of the first measures on his list, Ryan explained, is the highway bill that would fund highways and mass transit projects for five years. The $305 billion legislation would also renew the Export-Import bank. Additionally, he hopes to enact changes to the Elementary and Secondary Education Act to give power "back to the states." In regards to national security and the threat of ISIS, a task force on Homeland Security will continue to hold meetings to talk about changes to the visa waiver program. Finally, the speaker wishes to place a spotlight on America's energy potential.

“We can become an energy independent country if we put our minds to it.”

Ryan took a few moments to offer condolences to the families impacted in Friday’s shooting in Colorado Springs, while demanding “justice should be served.” The tragedy is proof we need to improve our health system, he said, and pointed to a bill introduced in the Energy Commerce Committee by Rep. Tim Murphy, Helping Families in Mental Health Crisis Act. Ryan applauded Murphy’s effort, which he has worked on for years. The speaker intends to make mental health reform a priority to “prevent violence and protect our citizens.”

Reps. Kevin McCarthy and Steve Scalise stepped up to the microphone next, both offering criticisms of President Obama’s appearance at the climate summit in Paris.

While Obama offered a doomsday scenario regarding environmental challenges, McCarthy insisted the president did not talk about the “success stories” in America, such as an EPA report that showed we actually lowered CO2 emissions.

Scalise was even harsher on the president, insisting his priorities don’t mesh with those of the American public.

“While the president speaks about the dangers of global warming, the American people want more focus on the strategy to defeat ISIS.”

In a major address Thursday, Ryan will discuss some of the most important challenges facing the country and his philosophy in regards to how we can reclaim our American ideals.