Obama Holds Joint Presser With Hollande: "Americans Will Not Be Terrorized" 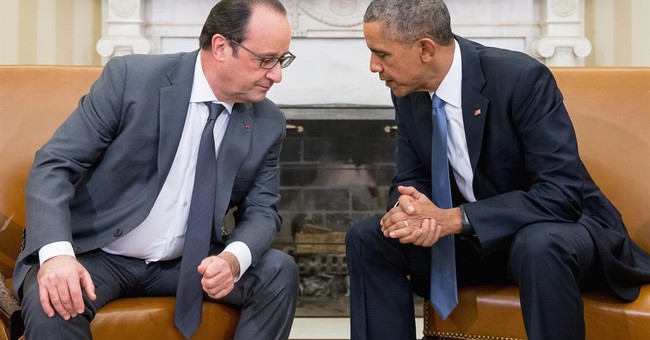 Presidents Obama and Hollande expressed their solidarity during a joint press conference in the East Room of the White House Tuesday.

Obama said he and Hollande were here to declare the United States and France stand united and are ready “to deliver justice to terrorists.” This barbaric terrorist group and its murderous ideology poses a serious threat to all of us. “It must be destroyed and we must do it together,” he insisted.

“Americans love France because we dedicate ourselves to the same ideals,” he said.

“We’ll never forget how the French people stood with us after 9/11,” he remarked. “We stand with you now.”

“Obama was the first one to call me” after the Paris massacre, Hollande said.

“After 9/11, we all felt American,” Hollande added. “Two people emerged as one, sharing the same emotion.”

The world leaders addressed the specific military responses their nations are prepared to act on after the terror attack in Paris. Obama said 8,000 airstrikes have pushed ISIL back from territory in Iraq and Syria. Yet, “we must do even more.”

The president said he and Hollande supported the French strikes in Syria and will continue to step up coordination. The U.S., he explained, will share intelligence to France to help destroy terror networks. He also called on the European Union to finally implement an agreement that requires airlines to share passenger information to stop terror fighters from entering nations.

Additionally, Hollande said we must close the border between Turkey and Syria and prevent the entry of terrorists. France also plans to support the forces fighting terrorists on the ground.

As for Russia’s role in the fight against terror in Syria, Obama said Russia’s strikes against moderate regimes only “bolster” the Assad regime.

“We agree Russia could play a role if it were to shift focus to defeating ISIL,” he said.

Obama then addressed concerns that a similar attack is imminent in the United States.

“I want you to know we will do everything in our power to protect our nation,” he said.

Our counterterrorism, homeland security, he emphasized, have “prevented attacks and they have saved lives.” As for the Syrian refugee program, which more than half the country has soundly rejected, “no one goes through more screenings than refugees,” the president ensured.

Obama concluded by insisting Americans, along with the French, must “uphold the rights and freedoms that defines our two republics.”

“We will not succumb to fear, nor can we allow fear to divide us," he said. "Americans will not be terrorized.”

“We will win and groups like ISIL will lose. Vive la France and God bless the United States of America.”