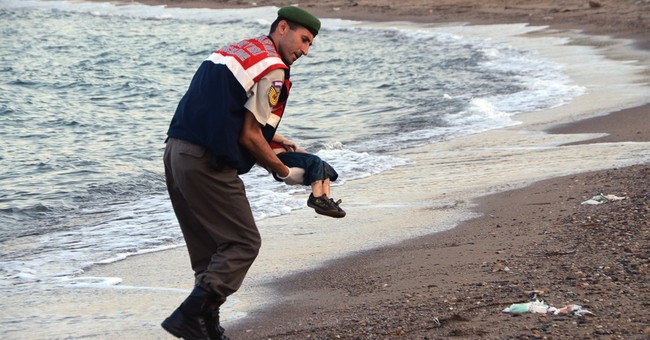 The Syrian refugee crisis now has a horrifying image to its name: a young toddler whose body was found washed ashore a Mediterranean beach.

Aylan Kurdi, just 3 years old, was found lying on the sand on a tourist resort in Bodrum, Turkey after his family's boat capsized in an attempt to reach Greece, according to NBC News. His 5-year-old brother Ghalib and mother Rehan also died, along with other refugees on the same trip. From Reuters:

The two boats, carrying a total of 23 people, had set off separately from the Akyarlar area of the Bodrum peninsula, a senior Turkish naval official said. The confirmed dead included five children and one woman. Seven people were rescued and two reached the shore in life jackets. The official said hopes were fading of saving the two people still missing.

Kurdi's background may explain why his life had such a tragic ending. He was from the north Syrian town of Kobani, which had been the scene of heavy hostility between the ISIS and Kurdish regional forces in recent months, reports Reuters. Such violence has forced tens of thousands of Syrians to seek asylum in Europe.

The disturbing pictures of Kurdi lying face down in the sand will now and forever be a scarring image of the Syrian crisis, yet sadly his story is far from being an anomaly.

So far this year, more than 2,500 people have died trying to cross the Mediterranean, the UNHCR said.

The International Organization for Migration has determined that about 350,000 migrants have tried to make similar trips since January.

The fate of Kurdi and the other drowned victims has demanded international action.

Justin Forsyth, chief executive of the charity Save the Children, said the "tragic image" was a reminder of "the dangers children and families are taking in search of a better life".

"This child's plight should concentrate minds and force the EU to come together and agree to a plan to tackle the refugee crisis," he added.