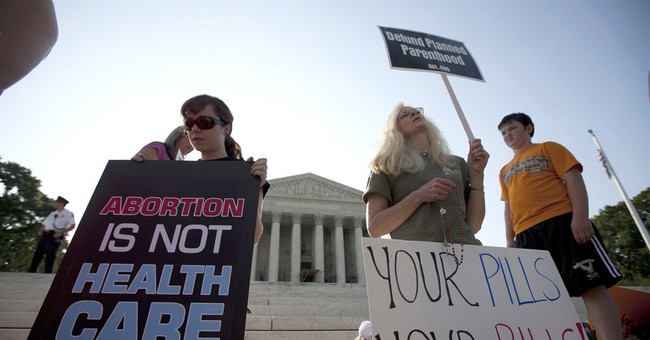 Last time I checked saving babies wasn’t a partisan position. Yet, the Supreme Court of the United States just rejected an appeal out of North Carolina that sought to keep an important ultrasound law on the books because it was too “ideological.”

The Supreme Court on Monday refused to hear an appeal from North Carolina officials seeking to revive a state law that had required doctors to perform ultrasounds, display the resulting sonograms and describe the fetuses to women seeking abortions.

Supreme Court custom leaves disappointed pro-lifers with no reasons for the dismissal. All they are left with is the "logic" behind the appeals court ruling issued by Judge J. Harvie Wilkinson III in December for the Fourth Circuit in Richmond, VA.

"This compelled speech, even though it is a regulation of the medical profession, is ideological in intent and in kind."

“This misguided law would have inserted politics and bad medicine into every exam room in North Carolina,” she said.

Antonin Scalia was the only justice to proclaim he would have accepted the case. Of course, if you were Salon, you could assume his pro-life beliefs are just a symptom of his faith-derangement syndrome.

As for the North Carolina legislator who fought to revive the law, their reasons seem awfully sincere.

North Carolina lawmakers had argued that requiring narrated ultrasounds would provide crucial information to women making an irrevocable decision, even if they chose to avert their eyes and not listen to the explanation of the displayed fetus images.

Shame on SCOTUS for ignoring the chance to keep this lifesaving law intact in North Carolina. Elsewhere in the country, these ultrasound laws have saved thousands of lives, for mothers who have the chance to actually see their babies growing in the womb rarely choose abortion. Take Texas, for example. Thanks for the passage of the ultrasound law, abortions in the Lone Star State decreased 10 to 15 percent in two years.

I fail to see how this law violates anyone's First Amendment rights. If anything, it all but guarantees our first freedoms for the most vulnerable among us: the unborn.

Cortney O'Brien
Did You Catch What's Funny About WaPo's Op-Ed About Why It's Tough to be Conservative Right Now?
Matt Vespa
Another Conservative Businessman Announces Run for Virginia Governor
Cortney O'Brien
'Unredacted with Kurt Schlichter': The Damage Has Been Done