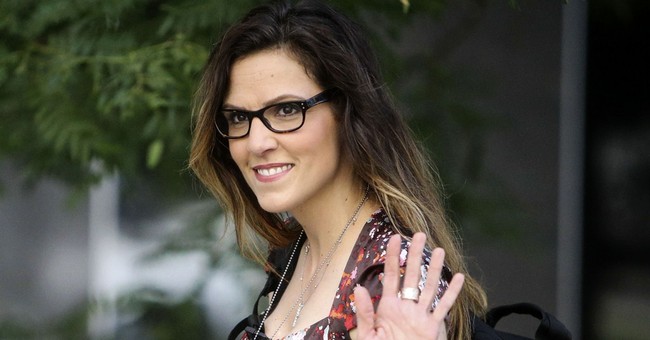 Update: Townhall is giving away free copies of "American Sniper" on DVD. Enter the contest here for your chance to win!

'American Sniper' Chris Kyle is a hero to most Americans for protecting his comrades and taking out terrorists during the Iraq War. The deadliest sniper in US history wrote a bestselling book about his service as a Navy SEAL and it was soon turned into an Oscar-winning film, just released on DVD Tuesday. Kyle’s story turned tragic, however, when he survived four tours in Iraq only to return home and be murdered by a vet he was trying to help.

There was a reason I said 'most' Americans admire Kyle. A select few in the media have suggested the sniper was a racist and, instead of protecting our country, was simply going on 'killing sprees.' As for liberal universities, they have tried to prevent screenings of the film on their campuses because it would be 'unsafe' for students.

Taya Kyle, Chris's poised widow, spoke about this controversy, her lasting love for her husband, her new book ‘American Wife,’ and much more with Townhall.

One of the first things Taya noticed about Chris when they met, was his humility and love for his country.

“He did have such an appreciation for this country and a patriotism that ran more deeply than I had seen before and just that he was willing to die for his country,” she said. “Without sounding cliché and without being flippant, he really felt it would be an honor to do that for this country. He recognized what freedom we have here. He was a cowboy, he was a college student. He had great opportunity and the rest of us did too. I think he had an appreciation for all of it – the land, the history, the people who fought for it for him – all of it.”

Her fondness for him doesn’t end there. She explained what other qualities made Chris a man.

“I think he was confident, but not arrogant,” she said. “He was confident that he wasn’t perfect, he didn’t try to be, but he tried to be the very best person he could possibly be. I think he was unique in that he had high standards for his kids and yet he was soft and loving and forgiving and not expecting them to be perfect. So, have high standards, but don’t expect perfection. Be a strong man, but be extraordinarily loving and soft.”

You can guess why she may have been hesitant to let Hollywood portray the man she loves on the big screen. But, it didn’t take long for her to feel comfortable handing over his story to Director Clint Eastwood. In her book, she provides a few anecdotes about how he and the cast came to stay at a local hotel to get to know her and her family as they prepared to shoot the film, calling Eastwood ‘unpretentious’ and ‘gracious.’ As for Bradley Cooper, who starred as Chris, she said he clearly did his homework.

“I think Bradley just hit it out of the park with knowing Chris’s soul and his spirit and the moments and expressing that and the pain in all that.”

This exclusive clip from the film is just a small glimpse into the struggles military families face when their spouses leave for deployments. Cooper and actress Sienna Miller, who plays Taya, nail the raw emotion of it all.

Divorce is exponentially higher for military couples than the average American family, Taya explained. The high potential for breakdowns in military marriages is one of the reasons Taya helped found the Chris Kyle Frog Foundation. She knows personally how hard deployments can be on husbands and wives, so the foundation is focused on offering experiences like revitalization retreats.

“We’re sending these couples on staycations or vacations where they get the weekend together to just be together,” she explained. “They don’t have to do anything, they make no plans, but we just make sure everything is paid for and seamless so they can just remember what it’s like to just be them outside of all the other stresses that are in their lives. Our main goal is to honor God and to honor this country by honoring and serving those families who serve.”

‘American Sniper’ came out on DVD Tuesday, a disc which includes cool new extras like this. As mentioned above, however, some people are trying to silence Chris’s story. What does Taya think about universities attempting to block screenings of the film?

“I feel like freedom of speech is one of the great things in this country and the freedom to do what you feel is right,” she said. “I would like my kids to go to college and be exposed to the real world and to make their own decisions and find their own path, instead of sending them somewhere where they would be creatively conditioned for one life path or another. In that way I think it’s disappointing that an institution that’s supposed to educate would not be interested in showing the reality that truly is a reality in the world we live in today.”

Taya keeps Chris with her wherever she goes – even on the red carpet. While reporters were gawking over A-list actresses and their gowns at February’s Academy Awards, this American Wife made the biggest fashion statement of all by wearing her late husband’s dog tags.

“I carried them with me because I don’t put too much into material things, but those were just really special,” she explained. “A lot of times I carry them with me to remind me it’s him and me still there, doing our thing. Honestly, it never crossed my mind to do it or not to do it. I just did and I didn’t think about it any further. I didn’t even think people would see it because I just had it in my hand with the purse.”

In her new book, Taya offers a candid glimpse into her journey of coping with life without Chris. One line in the chapter called “Faith” is hard to miss: “I don’t move away from grief, rather through it.” She spoke a little bit more of what that meant for her as she dealt with the pain of losing her husband.

“It’s one of those things that’s so painful, most people instinctively want to get away from it now but you can’t,” she explained. “I’ve been as busy as I can possibly be and I’ve focused on things outside of myself as much as I possibly can. I can testify that it’s not something you can possibly outrun, it’s not something you can ever shake really. Somebody else told me once that grief moves in with you, meaning it moves into your heart and it’s always there for the rest of your life. There’s nothing you can do about it, but you can learn how to live with it. I think that’s true for anybody and somebody they love. You just learn to live with it.”

One way she says she learns to live with it, is by giving her pain to God.

“I’ve learned to release my life to God because I don’t have control of it and I can’t get through it without Him, wanting to be independent,” she said. “Yes, pray, yes, be grateful, but still be independent and strong and making my own way. I feel like life has shown me that actually that’s a whole lot harder and less effective than letting myself give control to God and just taking it as it comes.”

Taya said her children are too young to watch ‘American Sniper,’ but plans to one day watch the entire movie with them. In the meantime, she explains why she exposed them to at least the basics of the film about their dad.

“We did watch the trailer of the movie and spent about 45 minutes going through it frame-by-frame and talking about it and letting them in on it a little bit,” she shared. “I know it’s very hard for them to be young and have a lot going on that they haven’t heard or don’t know about it and I try to assure them that they’ll know in time and there will be a right time to go through it. But I needed to expose them to it a little bit because the commercials tend to be during football games or at their friends’ house. I didn’t want them to be completely blindsided by something.”