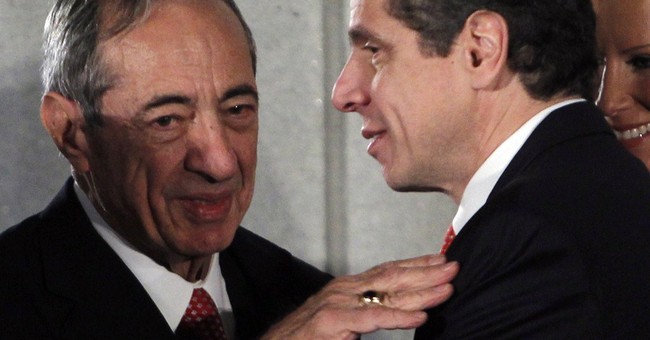 Today is certainly a confusing one for New York Governor Andrew Cuomo (D-NY). Hours after being sworn into his second term this morning in the Empire State, Cuomo learned that his father, Mario Cuomo, who served as governor of New York three times, had passed away.

Mario Cuomo has been heralded by progressives as a 'liberal beacon' who championed a powerful view of government. ABC News surmises that he was a guiding voice for the left wing of politics today:

Mario Cuomo's imprint on liberalism in American politics was nearly without parallel. The strains of liberalism and populism coursing through the Democratic Party today -- through the voices of Elizabeth Warren and others -- are echoes of Cuomo.

At his swearing in ceremony this morning, Gov. Andrew Cuomo explained his father was not in attendance due to illness:

"My father is not with us today. We had hoped that he was going to be able to come; he is at home and he is not well enough to come. We spent last night with him. ... I went through the speech with him. He said it was good, especially for a second-termer. See, my father is a third-termer. But he sends his regards to all of you.

"He couldn't be here physically today, my father," Andrew Cuomo added. "But my father is in this room. He is in the heart and mind of every person who is here. He is here and he is here, and his inspiration and his legacy and his experience is what has brought this state to this point. So let's give him a round of applause."

Mario Cuomo had recently been hospitalized for a heart condition. He was 82.