Number of Tenured Teachers in CA Fired for Poor Performance in Last Decade: 19 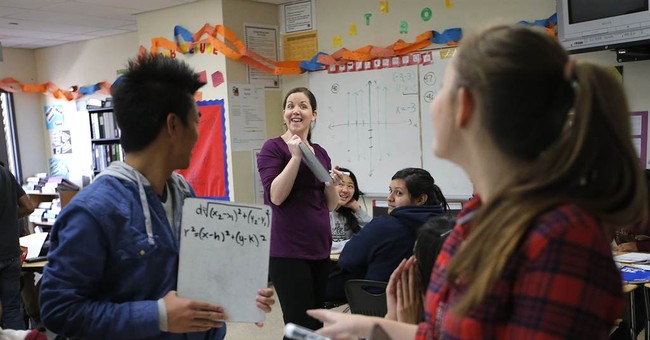 If students don't put in the work they need to and therefore receive failing grades, they don't get to move ahead. If only the same could be said for the teachers.

The Permanent Employment Statute in California has all but assured teachers that, once they reach tenure, they can stop trying. Just look at these shameful figures:

In the last ten years, only 91 teachers out of about 300,000 (.003 percent) who have attained permanence lost their jobs in California. Of those, only 19 (.0007 percent) have been dismissed for poor performance. Is it possible that Golden State teachers are that good? Such an astronomical permanence rate doesn’t square with the performance of California’s fourth- and eighth-graders, whose scores on National Assessment of Educational Progress tests persistently rank near the bottom.

Yes, even though these California elementary school teachers routinely earn poor reviews, they face no repercussions. It is this unfair practice nine California public school children are trying to abolish in Vergara v. California. If they succeed, permananence and other union-backed statutes such as time-consuming dismissals and seniority-based layoffs, will be ruled unconstitutional.

The California Teachers Association has come out strongly against this case, accusing backers of the lawsuit as being the "who's who of billionaire boys club" who are only concerned with "privatizing public schools and attacking teachers and their unions."

But, it's hard to see how policies that keep bad teachers right where they are is beneficial to students who are eager to learn. Superior Court judge Rolf Treu will rule on the case by July 10. Here's hoping he chooses children's futures over teachers' "rights."