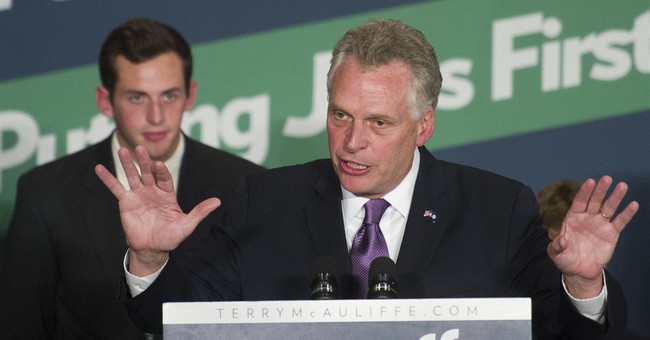 Terry McAuliffe, the Democrat who was recently elected to be Virginia’s next governor, has anything but a squeaky clean background. Now, even the left-leaning Slate isn’t afraid to expose his questionable connections in a new post titled, “Terry McAuliffe Has Already Begun His Reign of Sleaze.”

Say what you will about newly elected Virginia Gov. Terry McAuliffe, but he's never tried to seem anything that he's not. Quite the opposite, he relishes being known as "the ultimate political insider" who's bosom buddies with the Clintons.

He may be a veteran political animal in Washington's grotesque menagerie, but he has the public office experience of Arnold Schwarzenegger—which is to say, none. Quoth the Richmond Times-Dispatch: "His ignorance of state government is laughable and makes Rick Perry, the notorious governor of Texas, look like a Founding Father."

Yikes. After quoting other news outlets that have harshly criticized McAuliffe, Slate reveals his new controversial appointment in picking Levar Stoney as secretary of the commonwealth. Stoney is a GreenTech employee and McAuliffe’s former deputy campaign manager who admitted he lied to investigators about criminal activity during a Wisconsin election. Slate shares even more intriguing details.

Aside from the whole GreenTech ethics investigation, in 2004 Stoney was embroiled in a scandal involving Democratic operatives who slashed the tires of vans meant to drive Republican voters in Milwaukee County to the polls. He told the jury he wanted to become a U.S. senator one day.

Maybe Virginia will eventually regret its Democratic sweep -- especially one that has too many scandals to brush under the rug.

As Slate says, “Let the circle of quid pro quo be unbroken.”