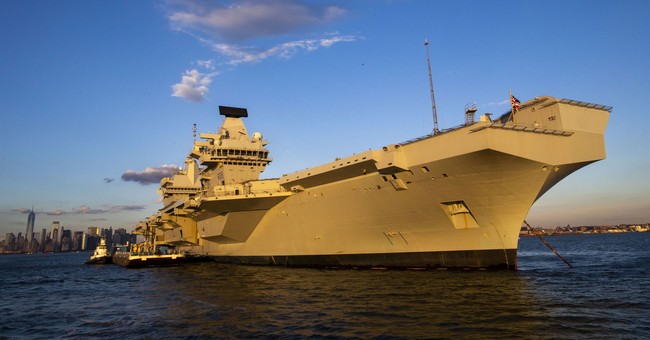 On Tuesday, Russia issued an explicit warning and an implied threat to the United States telling the U.S. “to stay far away from Crimea and [Russia’s] Black Sea coast.. for [the U.S.’s] own good.”

The remarks from Russian Deputy Foreign Minister Sergei Ryabkov come in response to two U.S. warship that will be arriving to the Black Sea sometime later this week.

The U.S. presence comes amidst Russia’s largest buildup of forces on their Ukrainian border since their 2014 annexation of Crimea and the renewed domestic conflict between pro-Russia separatists and the Ukrainian government.

Continuing the last few days ???? continues to move military forces towards the border regions of ???? as well as to Crimea. And ???? failed to show up to @OSCE meeting to discuss the issue. There is no doubt that they are moving all these forces with a purpose. pic.twitter.com/LyMxvB96gH

The deputy foreign minister, as cited by Russian media agencies, made clear that the U.S. is not seen as a friend and is not welcome in Russia’s neck of the world.

“The United States is our adversary and does everything it can to undermine Russia’s position on the world stage,” said Ryabkov, “We warn the United States that it will be better for them to stay far away.”

The international community has reacted strongly to Russia’s recent relocation of more than 80 thousands  combat troops to the former super power’s western border with Ukraine.

Many onlookers see similarities between Russia’s current military buildup to the country’s 2014 military campaign that resulted in the Russian annexation of Crimea, previously apart of Ukraine.

NATO Secretary-General Jens Stoltenberg expressed as much, saying in a news conference, “In recent weeks Russia has moved thousands of combat-ready troops to Ukraine's borders, the largest massing of Russian troops since the illegal annexation of Crimea in 2014."

Going on, the security-general proclaimed, "Russia must end this military build-up in and around Ukraine, stop its provocations and de-escalate immediately."

For their part, Russia argues that they are within their rights as a sovereign nation to move their troops anywhere within their borders. Further claiming that the U.S. is playing the role of instigator, not the Kremlin.

“There is absolutely nothing for American ships to be doing near our shores,” shared Deputy Foreign Minister Ryabkov. Going on to say,” this is purely a provocative action. Provocative in the direct sense of the word: they are testing our strength, playing on our nerves. They will not succeed.”

However, the international community has reason to doubt the Kremlin’s innocence as Russian President Vladimir Putin has reportedly refused to return communication from both the Ukrainian president and international stakeholders.

"The president's office, of course, made a request to speak with Vladimir Putin,” a Ukrainian presidential spokeswoman told Reuters. “We have not received an answer yet and we very much hope that this is not a refusal of dialogue," concluded the message.

The UN G-7 council has likewise expressed deep concern over Russia’s recent military buildup, calling for the Kremlin to recommit to previously agreed upon “Organization for Security and Cooperation in Europe (OSCE)” standards.

Russia declined to participate in today's @OSCE meeting with Ukraine to explain its unusual military buildup on ????'s borders and in occupied Crimea. We regret that Russia did not avail itself of this opportunity to address concerns and reduce risks under the #ViennaDocument. pic.twitter.com/wwkBxFD4Us

“These large-scale troop movements, without prior notification, represent threatening and destabilizing activities,” read a statement released  by the UN. “We call on Russia to uphold the OSCE principles and commitments that it has signed up to on transparency of military movements and to respond to the procedure established under Chapter III of the Vienna Document,” said the G-7 counsel.

The Biden Administration has continually professed a commitment to the sovereignty of Ukraine. However, the President has been less forthcoming as to the specific consequences of a continual Russian military buildup.

In an recent interview, U.S. Secretary of State Anthony Blinken reaffirmed the administration’s commitment, saying, "President Biden's been very clear about this: If Russia acts recklessly or aggressively, there will be costs, there will be consequences."

I met with Ukrainian Foreign Minister @DmytroKuleba today to discuss unwavering U.S. support for Ukraine’s sovereignty and territorial integrity. We continue to support Ukraine’s Euro-Atlantic integration in the face of Russia’s ongoing aggression in the Donbas and Crimea. pic.twitter.com/9prNvIXHaf

Going forward, the international community will continue to watch Russia keenly and the two U.S. warship are scheduled to remain in the Black Sea until May 4.