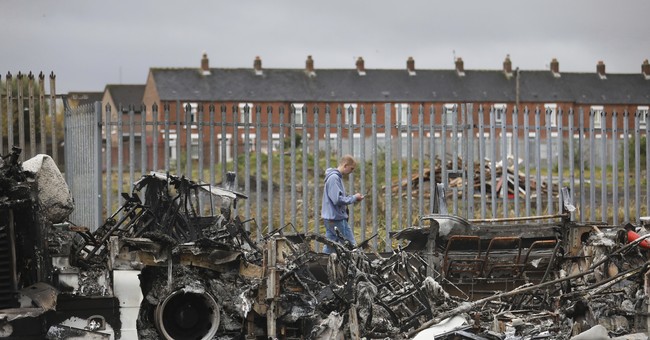 Northern Ireland has seen a dramatic spike in sectarian violence over the last week culminating on Wednesday night with eight officers being injured and the burning of a local bus.

Belfast tonight. Why are the media are silent? ?? ?????pic.twitter.com/XZKofrvLv7

Centered in the northern city of Belfast, Wednesday marks the sixth consecutive day of renewed conflict between the pro-UK, majority Protestant, Loyalists, and the pro-sovereignty, majority Catholic, Nationalists.

The violence is reportedly a result of heightened tensions over the consequences of Brexit and the government’s decision not to prosecute observers of a widely-attended June funeral for Bobby Storey, a senior nationalist figure and the former head of security for the Irish Republic Army (IRA).

According to Assistant Chief Jonathon Roberts of the Police Service of Northam Ireland, the rioting that erupted “was at a scale we haven't seen in Belfast or further afield in Northern Ireland for a number of years."

“We are very, very lucky,” he said, that “no-one was seriously injured or killed last night given in particular the large number of petrol bombs thrown.”

Over the past six days, more than 40 officers have been injured while attempting to deescalate the rioting that has been largely perpetrated by roaming groups of young adults and teenagers, with children as young as 12 reportedly taking place in the violence.

The chairman of the Northern Ireland Police Federation, Mark Lindsay, expressed concerns over the apparent manipulation of the country’s youth, saying, “There are young people who are being cynically used by older, more sinister elements of society.”

Continuing on to tell BBC Radio 4, “And young people are often the cannon fodder they use to go onto the streets to attack police.”