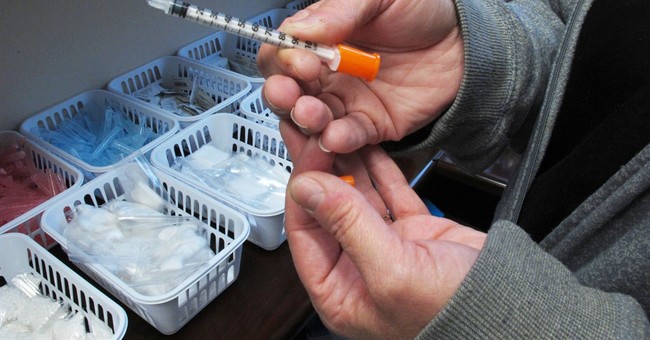 In the name of public health, counties in Washington are giving needles to underage children without checking ID’s and without discussing possible treatment options.

Speaking on Seattle’s Dori Monson Radio Show, a local community member named Grace told of a jarring incident she witnessed, “It was a boy, he went up to the van, got his needles, and then he walked off to the side of the parking lot and…proceeded to shoot up.”

She went on to lament, “I think if people actually watched something like that in progress, they would think twice about whether this program is actually helping or aiding people in supporting their addiction. And it’s really sad.”

On a different Seattle Radio show, the Jason Rantz Show, the namesake interviewed a  Seattle & King County Public Health spokesperson about the exchange program and how it is that needles are being given out to underage children.

The spokesperson expressed that if a clearly underage child requested clean needles, the staff “would likely use their experience to ensure that the teen does not feel stigmatized,” and if employees believed that supplying sterile needles would be in the minor’s best interest, the provider may decide that exchanging syringes is the best approach.

According to the spokesman, “we do not have a policy that states age requirements for exchange so I can’t say that there hasn’t been, or will not be a situation where a minor exchanges syringes.”

However, the public health spokesperson revealed a more cloudy understanding of how the program’s practices aid in keeping the streets clean and helping addicts receive the treatment they need.

Speaking of the practice of exchanging needles, the spokesperson said, “Historically, the program has operated as a one for one exchange but has always made sure that people coming into the exchange without any supplies left have what they need to be safe.”

Continuing on, the spokesperson commented on the process of introducing addicts to treatments, saying that those conversations “are generally client driven,” although “staff are well versed in conversations regarding resources and referrals to treatment.”

So according to the spokesperson, no exchange is necessary to get clean needles and if an addict doesn’t bring up their interest in treatment when receiving their free needles, then neither will the staff.

Giving sterile needles to drug addicts could very well improve the lives of those suffering from addiction and the communities they live within, but as programs like SCORE demonstrate, there remain serious question regarding the practices of such needle exchange programs, the standards they operate under and their overall impact.

A substantial percentage of drug addicts using programs like SCORE suffer from mental illnesses or live without a traditional home. The question is, are needle exchange programs a practical tool for improving their lives, or an indulging pat on the head that feels like progress, but in reality is causing more harm than good.