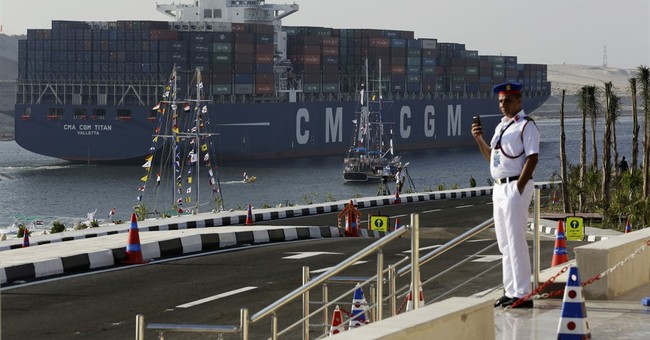 What do you and a massive 219-ton cargo ship have in common? Well, if you’ve ever stalled out on a crowded highway, then the answer is more than you might expect.

One of the largest shipping vessels in the world, the Ever Given, has been stuck in Egypt’s Suez Canal for more than two days after strong winds blew the ship diagonal on Tuesday morning. In the meantime, all travel through the canal has been suspended, causing a backup of more than 150 boats.

The Ever Given continues to block the Suez Canal, seen this morning by a Pléiades satellite:

Officials warn it could take weeks to clear the canal.

The Japanese company that owns the vessel, Shoei Kisen Kaisha, released a statement apologizing for the disruption to the highly traveled trade route, offering in a written statement, "We sincerely apologize for causing a great deal of worry to ships in the Suez Canal and those planning to go through the canal.” Adding, “we are trying to refloat [the Ever Given], but we are facing extreme difficulty.”

The ship is a quarter mile long and nearly 200 feet across.

For reference, the size of the ship stuck in the Suez Canal compared to other landmarks ?? pic.twitter.com/paAUNYO55E

The 101 mile-long Suez canal was opened by the Egyptian government in 1869 and provides a pivotal trade route connecting the Mediterranean Sea and the Red Sea. With it blocked, the alternative trade route around the southern tip of Africa can add approximately two weeks extra shipping time for goods traveling to and from China.

An estimated 12 percent of the world’s trade travels through the Suez Canal with an average in 2020 of 51.5 ship per day. The delay is likely to have not only immediate consequences, such as an increase in both the cost of shipping and the price of crude oil, but downstream effects on the global market as well.

You know that feeling when you stall at the lights and hold up traffic? This is a bit like that. A big boat is stuck in the Suez Canal and the queue is quite something. https://t.co/UZRiM6K98u pic.twitter.com/hSj4oR9AtP

The chairman went on to explain, “It is, in a manner of speaking, a very heavy whale on the beach…the ship, with the weight it now has, can’t really be pulled free. You can forget it.”

Bokalis and canal authorities have been worked tirelessly, using a platoon of tug boats, ditch diggers and backhoes to try and budge the massive Ever Given. But unfortunately, according to satellite photos taken on Thursday by Planet Labs Inc, the ship remains in the same position.

One possible solution proposed by Bokalis is air lifting shipping containers off the vessel in order to lighten the ship and allow it to be dislodged.

If there is good news to the story, it's that all crew members made it safely off the vessel.