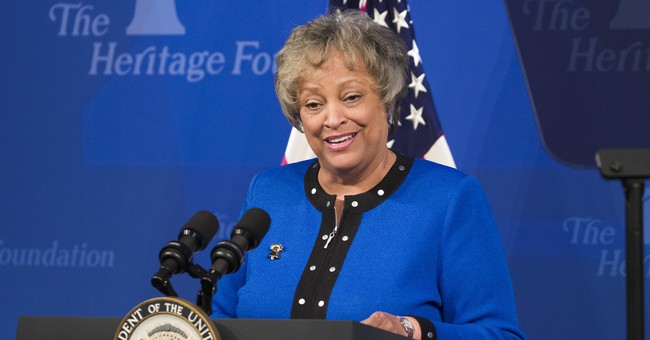 In a statement released by the Heritage Foundation, James explained the timing of the pairs exit.

“When we came on board as the executive leadership team three years ago, we set several goals and told Heritage’s board of trustees that we would serve for three to five years to see them through. We accomplished everything we set out to do. Now it’s time to let someone else take the reins.”

James, a renowned conservative thinker and voice, was born in southern Virginia to a single mother and was a student during the state’s historic desegregation of public schools. Upon graduating from Hampton University, the strong black woman went on to spend her career fighting for non-governmental, family-oriented pathways forward to improve education, lower poverty and keep America free and prosperous.

She first joined the Heritage Foundation in 2005 as a trustee and went on to assume the organization's highest office in 2018 after the departure of her predecessor, Jim DeMint.

Vice President Holmes, described by James as "a historian, diplomat, policy expert, author, and skilled manager," accepted the position in 2018 and quickly proceeded to aid the newly minted president in her mission of improving the conservative organization's content, influence and outreach.

According to a University of Pennsylvania index, “out of over 8,200 think tanks worldwide, Heritage was ranked No. 1 in the world for having the “Most Significant Impact on Public Policy” three years in a row, No. 1 for “Best Use of Social Media and Networks,” No. 1 for the “Best Use of the Internet,” and rose from No. 13 to No. 6 in the world for “Best Managed Think Tank.”

The chairman of the Heritage Foundation, Barb Van Andel-Gaby, had this to say on the pair's impact, “Their tireless dedication to Heritage has taken the organization to new heights, led to numerous accomplishments, and positioned the Heritage team to be ready for the battles ahead. Heritage today is the most important conservative organization in America because of their leadership.”

Of her time serving as the organization's president, James expressed, “I am proud of the many things we have accomplished together, including reaching out to new, nontraditional audiences of women, minorities, and young people and showing them how conservative solutions provide the best outcomes for all Americans.”

During their time in charge, James and Holmes oversaw many accomplishments, including the establishment of the National Coronavirus Recovery Commission, the development of the “True North Principals of Conservatism,” the creation of the Edwin J. Feulner Policy Institute, and arguably most pivotal, the growth of the organization’s reach, influence and output.

On the organization's future, Van Andel-Gaby commented, “Today, the Heritage leadership team and staff are as focused as ever on the Heritage mission. The fabric of our republic is being threatened, and the talented scholars at Heritage are working harder than ever to push back on the progressive left in America. Heritage’s board stands with them as they continue to fight.”

The Heritage Foundation was founded in 1973 and serves as the "nation's most broadly supported public policy research institute," with more than a half-million members.