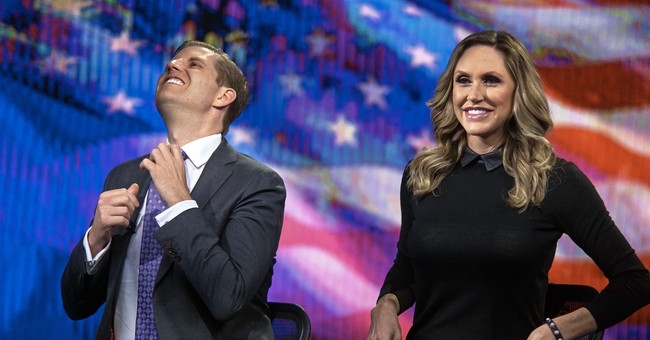 In an interview with Fox and Friends, Eric Trump confirmed suspicion that his wife is indeed considering a run in North Carolina’s upcoming Senate race. While she’s released no official statement on the matter, pundits have been quick to pencil Lara Trump on the ballot given her ties to the Tar Heel state and her undeniable name recognition.

Republicans such as Sen. Lindsey Graham (R-SC) have expressed confidence in a Lara Trump campaign, saying to Chris Wallace, "If she runs, I certainly will be behind her, because I think she represents the future of the Republican Party."

Lara Trump, born Lara Yunaska, was raised outside Wilmington, North Carolina, and studied communications at North Carolina State University. Along with her husband, she’s spent the last five years working to elect her father-in-law, serving as a senior advisor to the president’s reelection committee up through the waning days of his administration.

The excitement surrounding North Carolina’s Senate race in 2022 is partly due to the retirement of the seat’s incumbent, Sen. Richard Burr (R-NC). In an unusual twist, he announced during his 2016 campaign that he would not seek further reelection after the completion of his term.

Burr was first elected to Congress in 1995 and spent the bulk of his career known as a dependable Republican party player. However, he has recently come under considerable scrutiny for his vote to find former President Trump guilty at the conclusion of his second impeachment trial. He received a censure by the North Carolina Republican party shortly thereafter.

While Sen. Burr’s decision to enrage his Republican base has a limited effect on him personally, given his impending retirement, some have argued his choice could help propel Lara Trump to the seat if she does indeed decide to run.

Sen. Graham on Fox News said he thinks “The biggest winner… of this whole impeachment trial is Lara Trump," going on to say, “My dear friend Richard Burr — who I like and have been friends to a long time —just made Lara Trump almost a certain nominee for the Senate seat in North Carolina to replace him."

For her own part, Lara Trump has remained largely silent as she thinks through her options. Having spent years being berated nationally as if she was already a public official, the decision to continue down the same path, regardless of the likely outcome, may not be an appealing one.

In a 2017 appearance on Hannity, she spoke of the personal attacks levied against herself and her family, saying, “We’ve been dealing with it for almost two years now. I’d love to say that it gets easier, it doesn’t get easier.”