Another Federal Judge Strikes Down An Obama Executive Action On Immigration 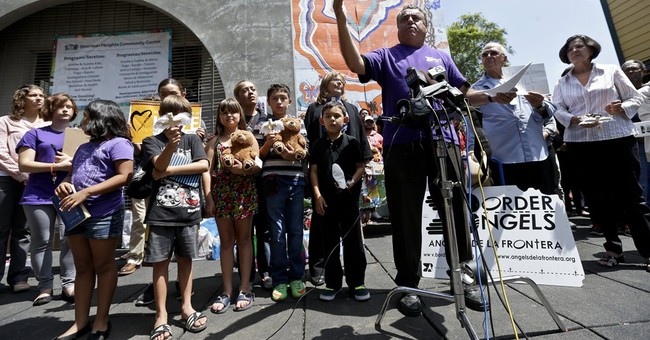 "At the heat of Plaintiffs' suit is their assertion that [the Department of Homeland Security] has adopted an unlawful detention policy aimed at deterring mass migration," United States District Court for the District of Columbia Judge James Boasberg wrote in his opinion. "Defendants have presented little empirical evidence," Boasberg continued, "that their detention policy achieves its only desired effect - i.e. that it actually deters potential immigrants from Central America."

DHS implemented the executive action challenged by plaintiffs in June 2014 to detain migrants coming from Honduras, Guatemala, and El Salvador who claimed a "credible fear" of persecution and sought asylum in the United States.

Previously, DHS had just released any migrant who claimed asylum into the U.S., but DHS determined that this policy was creating an "active migration network" that was encouraging more migrants to come to the United States.

To break this network, DHS began detaining migrants in federal facilities throughout the United States, including the Kansas County Residential Facility in Texas where all ten named plaintiffs in the suit were held.

DHS tried to argue that the lawsuit should have been moot since all ten named plaintiffs have since been released, but the judge found that since they were suing as a class, they still had standing.

Federal statute explicitly authorizes DHS to detain asylum seekers for any reason, and Judge Boasberg even admits that, "the statute contains no limitation on the Executive's discretion to detain, nor does it enumerate the factors that may be considered."

Nevertheless, Judge Boasberg held that the statute should be rewritten to read that DHS only has the authority to detain aliens for "a period reasonably necessary to bring about that alien's removal from the United States." At no point does Judge Boasberg then say how long it would be "reasonably necessary" for the DHS to hold migrants seeking asylum under the statute.

"The court held that it was illegal to detain families based on deterrence. It made clear that the government cannot deprive individuals of their liberty merely to send a message to others," American Civil Liberties Union Immigrants' Rights Project director Judy Rabinovitz said in a statement.

Asked at the White House press briefing Tuesday if the Obama administration will seek an emergency stay of Judge Boasberg's injunction, like they did for the injunction on Obama's Deferred Action for Parental Accountability program, White House Press Secretary Josh Earnest referred reporters to the Department of Justice.

The Department of Justice has not yet commented on whether or not they will seek a stay.