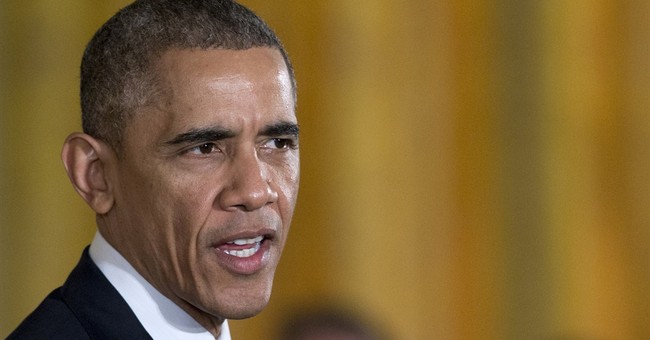 Buzzfeed has obtained and posted a series of talking points the White House is circulating among Capitol Hill Democrats before President Obama's amnesty announcement tonight. A full uninterrupted version of the document is posted below, but first here are some ideas on how conservatives should respond to Obama's propaganda:

Obama's executive action on immigration is the antithesis of "ensuring everyone plays by the same set of rules."

He is concocting arbitrary lines out of thin air that separate illegal immigrants worthy of work permits and Social Security numbers, from those who get nothing.

Why should parents of legal residents get benefits but not parents of DACA recipients? Why should an illegal immigrant who entered the country before 2007 be eligible for DACA but not one who entered in 2008?

All of these illegal immigrants will be forced to play under very different sets of rules, rules completely made up by Obama.

Nothing in Obama's plan will hold illegal immigrants accountable for breaking the law in any way. There are no fines, penalties, or back taxes to be paid.

Obama has previously admitted on over 20 occasions that his current executive action is lawless.

Obama already issued a lawful order in 2011, the Morton memo, the prioritized deporting felons not families. But that was not enough for amnesty advocates. They want work permits, Social Security numbers, and driver's licenses for all illegal immigrants. That is what Obama's new amnesty give millions of them.

Obama's new amnesty completely kills any possibility of a compromise immigration bill with Congress and Obama knows it.

Completely false. No president has ever issued a unilateral amnesty decree of this size and scope. Yes, many past presidents have protected smaller, specific immigrant groups after natural disasters or political upheaval in their home countries. But no president has ever tried to enact by fiat what Congress has specifically rejected by law.

1. Illegal immigrants not only already can pay taxes, but most do.
2. Again, there is zero accountability for any illegal immigrants here. No one is being asked to pay fines, penalties, or back taxes for breaking the law.
3. Again, the 2011 Morton memo already put the focus on deporting felons, not families. What this amnesty does is give illegal immigrants work permits, Social Security numbers, and driver's licenses.

1. No president has ever enacted an amnesty of this size and scope unilaterally.
2. Once given, legal status is almost never rescinded. It is very difficult to takeaway someone's benefits once they have been granted.
3. Nothing Congress can pass, other than a measure to defund the program, could possibly override Obama's action. Obama's legal theory rests entirely on his inherent "prosecutorial discretion" power as president. Since Obama's claimed power comes from his office, and not from statute, there is no law Congress could write to override it. The only way to contain Obama's abuse of power is through Congress' power over the purse.

1. If Obama wants to give every illegal immigrant in the country a background check, nothing is stopping him. That he has perfect legal authority to do already.
2. Again, all illegal immigrants are perfectly able to pay taxes already and many do.
3. If Obama insists on shutting down the federal government to protect his work permit and Social Security number giveaway, that is his choice. He is the one instigating a Constitutional crisis.

Here is the full letter: