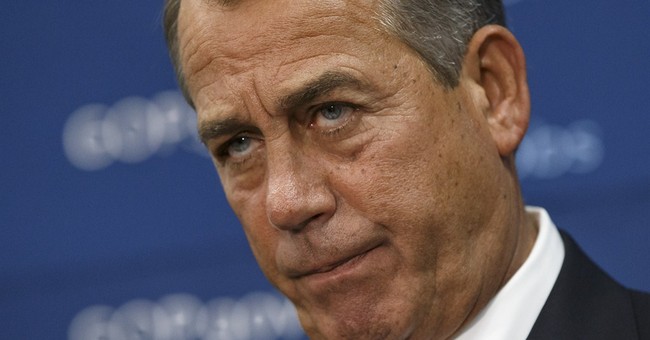 House Republicans used to be against amnesty and for spending cuts. But now on both issues, Speaker John Boehner (R-OH) has entirely capitulated to liberal Democrats.

Yesterday, House Republican leaders released the official text of Boehner's latest proposal to raise the debt limit. And it was just as terrible as conservatives thought it would be.

Boehner's plan would increase spending by over $8 billion over the next 10 years. Most of that spending would go towards restoring the military pension cuts Boehner agreed to earlier this year. The rest would go to higher Medicare reimbursement rates for doctors.

Not a cent of any of this new spending would be paid for until 2023 when Congress would supposedly extend sequester cuts to some mandatory budget programs for another year.

No honest person with half a brain believes either scenario will ever play out as advertised.

While the military pension cuts should be undone, House Republicans must find a more honest pay for.