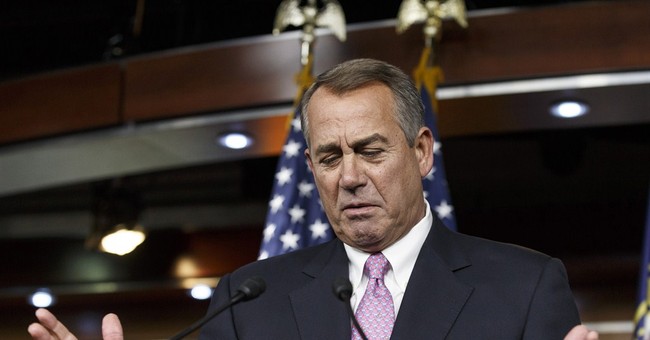 You remember the old Boehner rule right? Any increase in the statutory borrowing limit must be accompanied by spending cuts of equal value.

Well not only has Boehner completely abandoned that principle, but now he is pushing a plan that would do the exact opposite: Boehner now says any increase in the statutory borrowing limit must be accompanied by spending increases! Politico reports:

House Republicans are moving toward introducing a bill that would lift the debt limit until the first quarter of 2015, while patching the Medicare reimbursement rate for nine months and reversing recent changes to some military retirement benefits, according to multiple sources familiar with internal deliberations.

Both of those measures, upping the Medicare reimbursement rate and undoing recent cuts to some military retirement benefits, would INCREASE federal government spending. And how does Boehner plan to pay for all this new spending? By extending out the supposed sequester cuts that Budget Committee Chairman Paul Ryan (R-WI) already agreed to undo earlier this year.

In fact, the military pension cuts Boehner now wants to reverse were almost half of the entire spending cuts Ryan agreed to.

In other words, House Republican leadership is proposing to increase spending now (about $9 billion for the doc fix and about $16 billion over the next ten years for the pensions) in exchange for supposed spending cuts ten years from now that no one believes are ever going to happen.

A group of real conservatives has had enough of Boehner's big spending ways and our now pushing for a clean debt limit hike. BuzzFeed reports:

In recent weeks, a group of conservative Republicans have rallied around an unusual solution to the perennial battle: bring a so-called “clean” debt-ceiling increase to the floor, let Democrats pass it with a handful of Republicans, and move on.

The “let Democrats pass it” approach has been embraced by a number of prominent House conservatives including Reps. Raúl Labrador, Michele Bachmann, Justin Amash, and Thomas Massie. The move, which has not been endorsed or floated by House leadership, would require either the majority of Republican members to vote “present” or have a handful of Republicans vote “yes” with Democrats to have such a bill clear the House.

If Boehner wants to undo the military pension cuts he supported just a few months ago, and he should, he needs to find some real spending offsets that happen concurrently. And he should not do it in the context of the debt limit debate.

If the alternative is Boehner's plan for more government spending, then conservatives should support a clean debt limit hike as soon as possible.