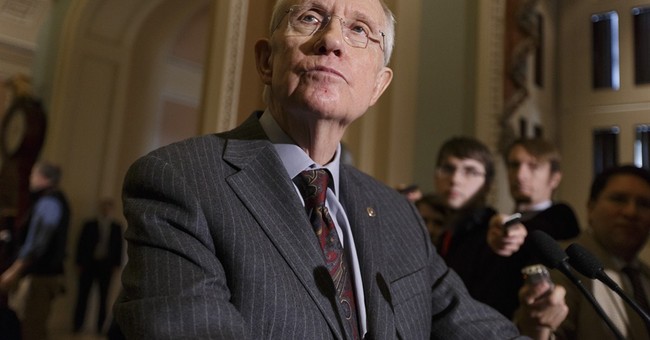 Senate Democrats are prepared to let their proposed Unemployment Insurance extension die instead of even allowing a vote on a Republican amendment that could pay for the benefits, and restore some other cuts to veterans benefits, by ending fraudulent tax credit payments to illegal immigrants.

"We've done everything Republicans wanted," Majority Leader Harry Reid (D-NV) said Thursday of his decision to schedule a vote on the UI bill Monday, "Now is the time to fish or cut bait."

Of course, Reid has not come close to working with Republicans on the issue. Instead, Reid "filled the amendment tree" on the UI bill, a complex Senate maneuver that has the effect of banning all minority amendments.

Sen. Kelly Ayotte (R-NH) had signaled a willingness to work with Democrats on UI by breaking with her party earlier this week to give Democrats the 60 votes they needed to begin debate on the bill. But Ayotte wants a vote on her amendment that would not only pay for the UI extension, but also undo some of the veteran benefit cuts Congress agreed to last year.

Ayotte's amendment would simply require anyone who wanted to participate in the Additional Child Tax Credit program to supply a Social Security number before they were allowed to collect any checks from the government. According to the Treasury Department, illegal immigrants collected $4.2 billion ACTC funds in 2011 alone.

According to Ayotte's office, her amendment would save taxpayers more than $20 billion over ten years. That is more than enough to pay for the UI extension and undo some of the veteran benefits cuts made last year.

Democrats vehemently oppose Ayotte's amendment. "This idea of going after children is one of the worst ideas I have ever heard," Sen. Barbara Boxer (D-CA) said in floor debate Thursday, according to The Washington Examiner's Byron York. "I am shocked — I am shocked. You're going to hurt children. You're going to take away food out of their mouths."