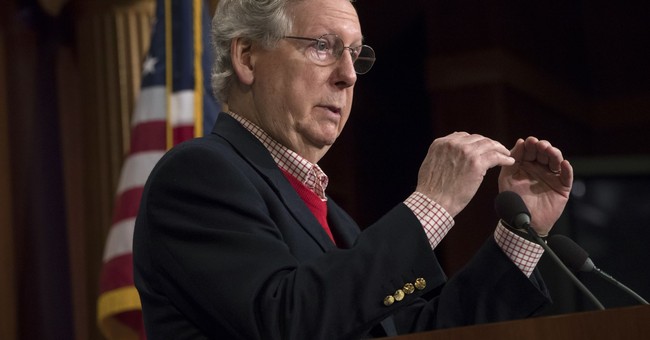 Senate Majority Leader Mitch McConnell (R-KY) showed off his snarky side on Friday, when he was asked to comment on former White House strategist Steve Bannon's involvement in the recent Alabama Senate special election. Bannon supported Republican Judge Roy Moore, who lost to Democrat Doug Jones in what was a stunner of an election.

McConnell, with an impressive amount of control, said that the "political genius on display" in Alabama that resulted in the lost Senate seat in a very reliably red state was "hard to ignore."

.@SenateMajLdr on Steve Bannon's role in Alabama Senate race: "Let me just say this: The political genius on display throwing away a seat in the reddest state in America is hard to ignore." https://t.co/CFdzczE0fE pic.twitter.com/oHsJFwJvav

The senator appeared to be quite pleased with his remark as he smiled to himself afterwards.

Many others were impressed with McConnell's candor of the situation, tweeting various reaction gifs.

I mean, he's not entirely wrong. There's no way Alabama should have gone to a Democrat in a state that hasn't gone blue in a presidential election since 1976. Something went terribly wrong in this election, and while it's not entirely Bannon's fault, the GOP would be wise to avoid this situation ever again.