Omarosa Leaving White House in January; May Have Been 'Dragged' Off Grounds 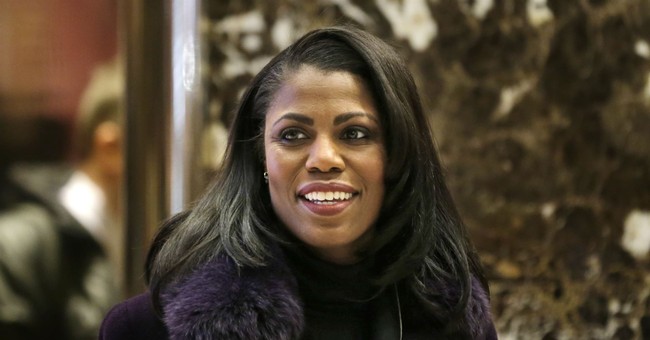 Omarosa Manigault Newman will be leaving the Trump Administration in January, it was announced on Wednesday. White House Press Secretary Sarah Huckabee Sanders said her resignation will go into effect on January 20th. Manigault Newman was the director of communications at the White House Office of Public Liaison and was Trump's chief advisor on African-American issues.

Shortly after her departure was announced, reports began to surface that Manigault Newman had been "physically dragged" off of the White House grounds on Tuesday evening.

Omarosa, the former "Apprentice" star who served as a White House adviser to Trump, was "physically dragged and escorted off the campus" last night.

The White House said this morning she "resigned yesterday to pursue other opportunities." https://t.co/TnB1qj22Nr @elistokols

Journalist April Ryan said that Gen. Kelly was the one who did the firing, and that Manigault Newman was spewing profanities at the time.

Sources say General Kelly did the firing and Omarosa is alleged to have acted very vulgar and cursed a lot and said she helped elect President Trump. The word is a General Kelly had it and got rid of her.

According to multiple sources Omarosa did not resign. She was even escorted out of he building and off campus.

Okay the White House still contends Omarosa signed a resignation letter. But Gen Kelly Kicked her out will high drama with the Minister offering vulgarities and curse words as she was escorted out of the building and off campus

And, of course, because there's a Trump tweet for everything: here's his tweet from 2013 regarding Omarosa on his television show.

What will happen to Omarosa tonight? One of our all time great episodes!