Angus King a Hard No On Assault Rifle Ban 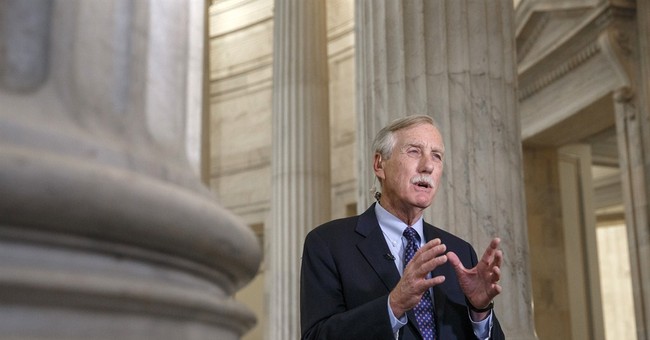 Sunday's shooting at a church in Sutherland Springs, Texas, has revived calls for new gun control laws, particularly those banning so-called "military-style" rifles. The shooter, Devin Patrick Kelley, used either an AR-15 or a similar weapon to kill 26 people and injure many more before killing himself. Kelley, who was convicted of domestic violence charges, should have been prohibited from purchasing the weapon in the first place, but his conviction was not entered into the national database by the Air Force.

One of those people who isn't calling for more gun laws is Maine Sen. Angus King (I), who says that he doesn't think they'll actually be effective in stopping crimes. Speaking on MSNBC, King cited Maine's high gun ownership rate compared to its extremely low crime rate, and said that during the last effort to ban scary-looking weapons, gun makers simply altered the look of the gun to be compliant with the law.

Instead, King said that we should still have background checks (and fix any gaps or loopholes that resulted in tragedies like Sunday's), and perhaps limit magazine sizes and consider banning bump stocks. King also said that mental health needs to be emphasized, in order to keep guns away from people who shouldn't have them.

Of course, King is correct, and it's important to hear someone not from the Republican Party say these things. The look of a gun may make it seem more lethal, but the overall firepower is the same. It is important to be educated on these issues before making legislation.