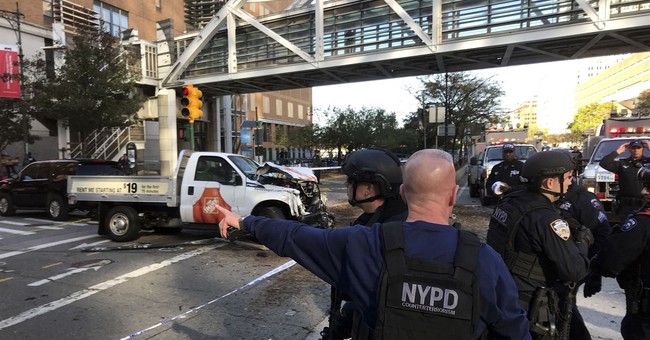 Statement from @POTUS @realDonaldTrump on the Terrorist Attack in New York City pic.twitter.com/nMe1WpqGQ6

NYPD says they will go ahead with Halloween Day parade with heightened security.

No terrorist organization has taken responsibility for today's attack at this time.

UPDATE (5:36 p.m.): ABC is reporting the suspect in custody is Sayfullo Saipov, a 29-year-old from Tampa. Saipov is alive and made statements in the hospital.

police: suspect is 29 years old.. and he did make statements when he got out of the truck. he is in the hospital.

UPDATE (5:30 p.m.): President Trump has weighed in, and said the attack was committed by a "very sick and deranged person."

In NYC, looks like another attack by a very sick and deranged person. Law enforcement is following this closely. NOT IN THE U.S.A.!

The driver has been identified only as a 29-year-old male, who was shot in the abdomen. No other identifying information has been released.

Here is a picture purportedly of the suspect:

UPDATE (5:24 p.m.): NYC Mayor Bill de Blasio has declared today's attack to be an act of terror. The death toll has now been raised from six to eight, with more injured.

"Let me be clear, based on the information we have at this moment, this was an act of terror" - Bill de Blasio

The people were killed after they were run over by the truck, and the only person shot was the assailant. The firearms were "imitation" and were not real.

Gov. Andrew Cuomo said that there's no evidence that this attack was part of a larger plot or any additional threat to the city.

UPDATE (4:57 p.m.): The First Lady has tweeted her thoughts and prayers.

My heart breaks for #NYC today. Thoughts & prayers as we monitor the situation.

UPDATE (4:48 p.m.): The NYPD is now reporting that nine people were injured, not 15. The number killed remains at six, and more witnesses have confirmed that the attacker yelled "Allahu akbar."

UPDATE (4:35 p.m.): This story keeps getting a bit stranger. MSNBC has a video of the truck driver holding some sort of weapon, but it's unclear if this is a real gun or a fake gun. The weapon was also reported to be a BB gun.

Video of suspect that was driving truck holding what appears to be (real or fake) weapon; he is now in NYPD custody @MSNBC pic.twitter.com/Hm7CTMICFo

The driver may have yelled Allahu akbar.

BREAKING: At least 6 people killed after incident in Lower Manhattan; about a dozen others injured https://t.co/AyhEnRC7bu

The vehicle struck multiple people on the path. There are several fatalities and numerous people injured.

UPDATE (3:44 p.m.): The incident is not believed to be related to terrorism. (See later updates.)

Per PD sources, a fight between two truck drivers lead to one truck hitting multiple pedestrians, and one truck driver opened fired

An eyewitness report said it stemmed from a car accident:

Witness describes what he saw in Lower Manhattan pic.twitter.com/Fm3wdrkb10

A person is in custody after a shooting near Stuyvesant High School in Lower Manhattan, the NYPD is reporting. People are being advised to avoid the area due to police activity.

At least five people have been shot. According to one source, those injured were not police officers.

#BREAKING: At least five shot in what appears to be active shooter situation in Manhattan, one suspect in custody https://t.co/hth1MezWJ0

Per @NYPD1Pct shooter in custody. Driver of Vehicle in custody. *Multiple* people shot. Stay away from area

Others were reportedly run over by a box truck.

Mayor Bill de Blasio's office said there is "no active threat" to the area.