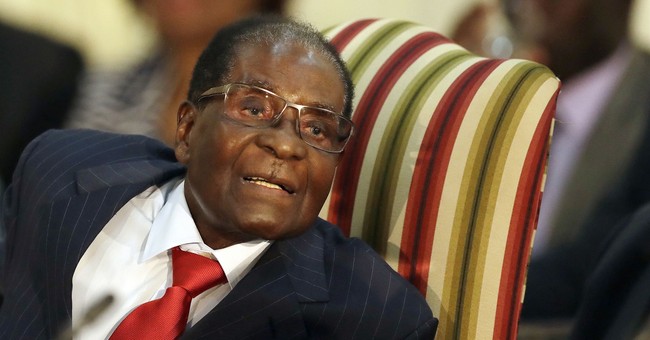 UPDATE: They changed their mind and removed him from the post.

Zimbabwean dictator Robert Mugabe has been named one of the World Health Organization's "Goodwill Ambassadors," in a move that has puzzled just about everyone on the face of the earth. Mugabe, who has led Zimbabwe since 1980, has seen the country essentially fall apart under his leadership. Life expectancy in Zimbabwe is just 60 years and Mugabe is accused of dozens of human rights abuses.

1/3 @DrTedros announced that President Mugabe of Zimbabwe agreed to serve as a Goodwill Amb. on NCDs for Africa https://t.co/jasA8OS2RA

2/3 Zimbabwe established a levy fund for NCDs, an innovative domestic resource mobilization approach that other countries can learn from.

3/3 The President committed to mobilize his colleagues in his region to prioritize noncommunicable diseases.

In his new post, Mugabe is being asked to be the "Goodwill Ambassador" throughout Africa on conditions such as stroke, heart attack, and asthma. Ironically, Mugabe often leaves the country (despite his relatively advanced age) for medical treatments as Zimbabwe's healthcare system is in shambles.

According to people working for the World Health Organization, they were "dumbfounded" by the move and are concerned that Mugabe's position will make the organization seem less credible.

Senior WHO staff dumbfounded. Greatly concerned about the effects this decision will have on our credibility and funding. https://t.co/k0zgzGOst1

Many major governments, including the U.K. and the United States, have criticized the WHO for this move. The organization is now reportedly "rethinking" their decision.

Mugabe is hardly a goodwill ambassador for any cause, but it's a sick joke to name him one for healthcare.