GoFundMe For Family of Soldier Killed in Niger Raises Over $600,000 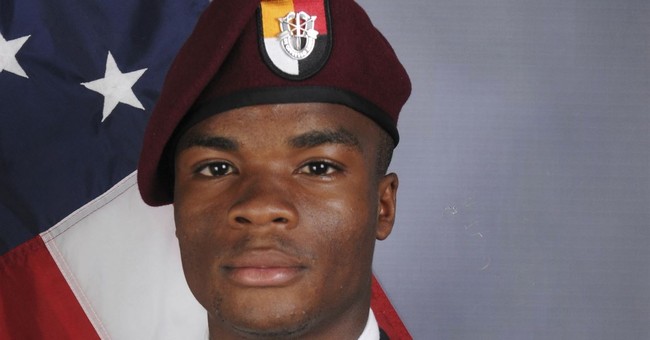 With the bizarre back-and-forth between Trump's Chief of Staff John F. Kelly and Rep. Frederica Wilson (D-FL) over President Trump's condolence call to the family of Sgt. La David T. Johnson, it has almost been forgotten that Sgt. Johnson was a real person who left behind a grieving pregnant widow and two small children. Sgt. Johnson was one of the four soldiers killed after an ambush in Niger earlier this month.

While I can't imagine the amount of pain the Johnson family is experiencing, there is at least one bright spot amidst all of the controversy: ordinary people have chipped in over $600,000 for the college funds of Sgt. Johnson's children. A GoFundMe was created on Monday for the family, and easily surpassed its initial goal of raising $100,000 for their educations. The goal is now at $1 million.

Verified @gofundme campaign to pay for college for the children of Sgt. La David T. Johnson, KIA in Niger.https://t.co/RLLV8oE7FO

Sean Hannity and NFL Commissioner Roger Goodell are among the people who have donated to the GoFundMe.

This is what people should be focusing on. Politicizing anyone's death is absolutely horrible, regardless of which side is doing the politicizing. Sgt. Johnson was a father, a son, and a friend. He should not be treated as an opportunity to become a "rock star" in the political arena.

However, people coming together to support a family going through unimaginable pain in order to ease some of the numerous burdens they're going to have to experience in the coming years is something that should be applauded. Even in these divisive times, people can still come together to help out a deserving family.