NHL Player Who Protested Anthem Will Not Do It Again 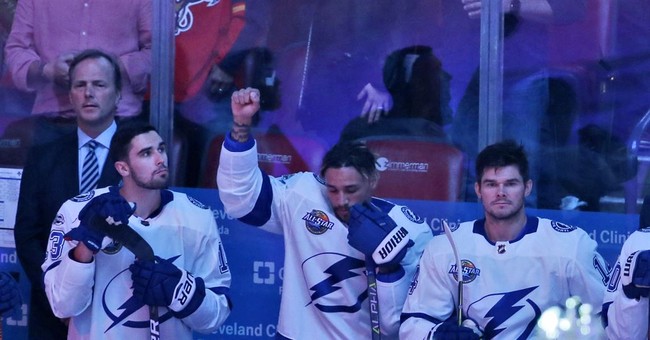 Tampa Bay Lightning player J.T. Brown, who raised his fist in protest during the playing of the Star-Spangled Banner before a game, will not do that again. In a message posted on Twitter, Brown said that he intends on using his platform to continue with community engagement and work with others to improve relations and to reduce tensions.

As far as anthem protests, however, he said he is "done raising [his] fist during the national anthem."

Brown plans to continue meeting with the Tampa PD, and will even go on a ride-along with the officers.

Additionally, Brown said that he will be donating game tickets to organizations such as Bigs in Blue, which provides police officer mentors to children, and the RICH House, which serves disadvantaged children, with the goal of building stronger communities in the Tampa Bay area.

Brown recently spent a day with the Tampa Police Department at their invitation. He said he had a "great time" learning about what the officers in his city go through on a day-to-day basis.

This is an excellent statement from Brown, and hopefully he will be able to do a lot of good throughout the Tampa area during this season. Anthem protests have proven themselves to be very divisive, and he's likely going to accomplish far more productive things by interacting with his community and the police department. This will have better repercussions than a raised fist.