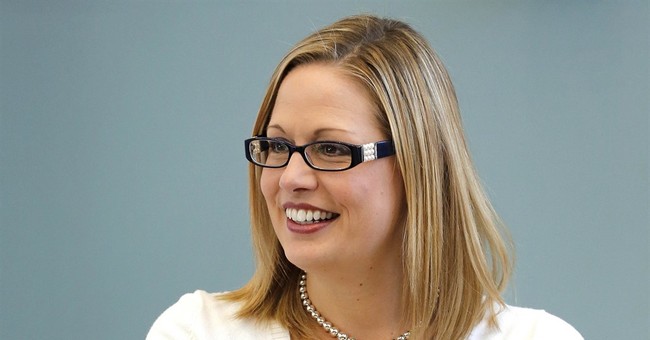 Rep. Kyrsten Sinema (D-AZ), the first openly bisexual member of Congress, announced that she will be challenging Sen. Jeff Flake (R-AZ) for his Senate seat in the 2018 election. Sinema made the announcement on Thursday.

I owe a large debt to my country. I got my shot and now it's my duty to help others get theirs. That’s why I’m announcing my campaign to represent Arizona in the United States Senate. Join our campaign today: https://t.co/8vJhyAJIbr https://t.co/gJufNOIsGX

Our nation is facing a lot of problems right now, but we can fix these problems if we work together.

Sinema was immediately endorsed by EMILY's List, who also sent out fundraising emails for the representative.

Sinema was first elected to the House of Representatives in 2012, and was reelected in 2016 by 21 points.

Flake is considered to be one of the more vulnerable members of the Senate, and was only elected in 2012 by three points. Since then, he's had very low approval ratings among Arizonans and has publicly clashed with President Donald Trump. He will face at least one primary challenge. This could be a very interesting election to watch come 2018--stay tuned.