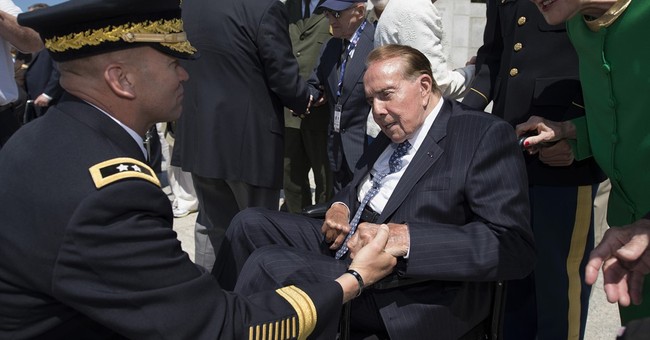 Former Sen. Bob Dole (R-KS) is in the hospital, he tweeted on Friday. He said that he hoped to be "home sipping a cosmo" in the near future and thanked people for their prayers and well-wishes.

Thank you all for your prayers and well wishes. I hope to be home sipping a cosmo in a few days. https://t.co/V9ezzlPbE8

Sorry to miss #InvictusGames2017. I’m with my husband, @SenatorDole, at the hospital. Please pray for his speedy recovery. - Elizabeth Dole

According to Dole's spokesperson, the former senator has been hospitalized for low blood pressure at Walter Reed Military Medical Center since September 13. Dole turned 94 years old on July 22.

Many tweeted their well-wishes for Dole's speedy recovery.

Robba and I are praying for you and wishing you a speedy recovery, @SenatorDole. https://t.co/nGmxX54lBE

You can't keep a great man down.

JUST IN: Former Kansas Sen. Bob Dole has been hospitalized, his wife, Elizabeth Dole says. We wish you a speedy recovery, @SenatorDole. pic.twitter.com/SNhxmUc6LK

Please join me in praying for a speedy recovery for our friend and hero, @SenatorDole! https://t.co/vE3C4eDy3F

Wishing my friend @SenatorDole well and praying for a quick and speedy recovery.