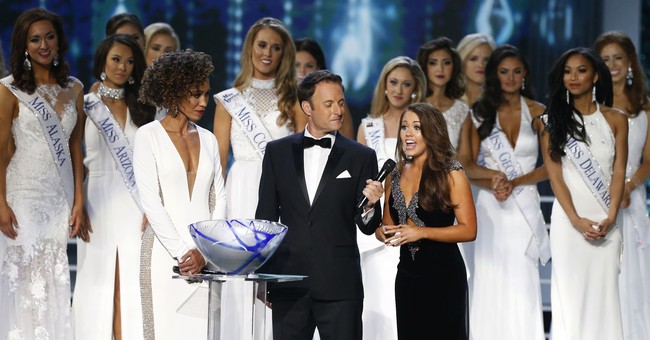 On Sunday night, Miss North Dakota Cara Mund became the first-ever Miss North Dakota to be crowned Miss America. Mund, a 23-year-old from Bismarck, North Dakota, is a graduate of Brown University and recently interned for Sen. John Hoeven (R-ND). Mund is the first Ivy League graduate to win Miss America since 1954, and plans on attending Notre Dame Law School after her reign.

While Mund's win is fairly uncontroversial, what raised some eyebrows last night were the amount of politics-related questions that were asked to the beauty queens prior to the crowning. Of the questions asked to the top five, four of them were explicitly political.

First up, Miss Missouri was asked if she thought that President Donald Trump had colluded with Russia during the presidential campaign. She said that she would have to say that he was innocent of collusion, as there is not currently enough evidence that he is guilty. She also believed that the investigation into the collusion should continue.

Miss Texas was asked about Charlottesville protests, and if she agreed with Trump that there was "very fine people" on both sides of the protests. She said that she thought Trump should have made a statement earlier than he did, and that it's important to make people feel safe in the United States.

.@MissAmericaTX is up next and she will be answering a question from @MrJessCagle. #MissAmerica pic.twitter.com/WbSBx3c5Ul

The eventual winner Miss North Dakota was asked about her thoughts on the U.S. withdrawal from the Paris Accords. She said that she did not think the United States should have withdrawn and that she disagrees with the decision. After the show, she later clarified that while she disagrees with the Trump administration on this issue, she does still support the president.

Miss New Jersey was asked about her thoughts on removing Confederate statues. She said that they belonged in museums, but not discarded altogether.

The fourth question goes to @MissAmericaNJ, who will be answering it from @taralipinski! #MissAmerica pic.twitter.com/uJS2V7UYjX

The only question in the final round that did not concern politics went to, ironically enough, Miss District of Columbia, who was asked if she'd support legislation banning full-contact football in elementary and high schools due to the risk of concussions. She said that she would, as she's worried the sport could have a detrimental effect on young brains.

The last question of the night goes to @MissAmericaDC, who will be answering @ThomasRhett's question. #MissAmerica pic.twitter.com/513raZLSNC

I understand that there's a concerted effort to make a beauty pageant look less superficial, but it seems rather unfair to ask someone a question that literally nobody knows a definite answer to (Russian collusion) versus...banning football. Additionally, it seems kind of awkward to put a potential Miss America quite literally on a pedestal to speak out about how she disapproves of the president of the United States before she's even crowned.

I've written before about the slow creep of politics into things that are pretty expressly non-political, from awards shows, children's books, and now beauty pageants. People don't want to be inundated with politics all the time, yet there seems to be no sign of anyone wanting to stop.

Congrats to the newly-crowned Miss America!