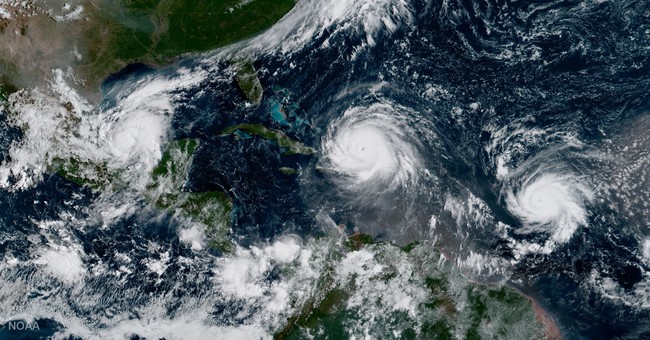 Hurricane names are set years in advance, and are only taken out of circulation if they're particularly devastating. The names alternate boy/girl and start with the letter A and end with Z. This week, Hurricane Irma is going to make landfall in Florida, and while the impact is yet to be seen, it's not looking good.

So, naturally, over 8,000 people have signed a petition asking for Hurricane Irma to be re-named "Hurricane Ivanka" after President Donald Trump's eldest daughter. Ivanka is accued of being "complicit in the destruction" the nation faces due to the Trump administration's climate policy. By changing the name, the petition argues, the Trump administration will be pressured into taking a stand on preventing climate change and other future storms.

Even Ivanka Trump, who promised to try to influence her father on certain issues like climate change, has quietly accepted the administration’s lack of action on this very serious issue. Ivanka Trump can say what she wants about climate change, but as long as she quietly stands back, she remains complicit in the destruction we all face at the hands of her father’s administration.

That’s why we’re petitioning the World Meteorological Association to rename Hurricane Irma to Hurricane Ivanka. We need to put pressure on members of Trump’s administration to take real a stand for the health and safety of our world and generations to come.

While there's about a zero percent chance the name will actually be changed to Ivanka, the petition has gotten some high-profile notice. Actor George Takei said that it'd be "wrong" to name Irma after Ivanka, because Ivanka is "weak, powerless & ineffective."

After all, Irma is a powerful fast moving storm while Ivanka is weak, powerless & ineffective.

For all of our readers in Hurricane Irma's path: please stay safe.