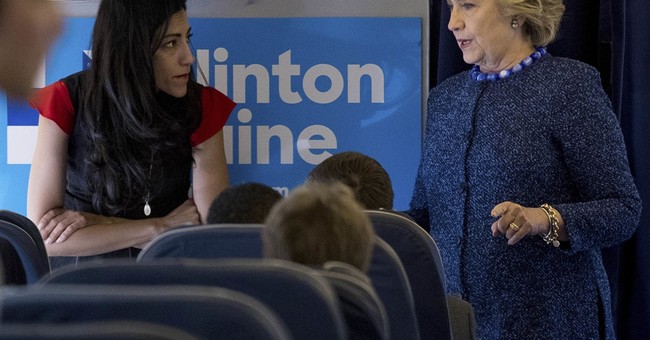 Last October, the FBI re-opened their case concerning Hillary Clinton's emails when new emails were discovered on Anthony Weiner's computer during an investigation about him sexting a 15-year-old girl. Weiner was married to senior Clinton aide Huma Abedin at the time (Abedin has since filed for divorce), and according to Clinton's new book "What Happened," Abedin was quite upset when she learned that her husband had played a role in the re-opening of the investigation.

Clinton writes that Abedin "burst into tears" at the news, and said that Weiner was going to be "the death of (her)." Clinton herself then said that Weiner had caused her "so much heartache" even prior to the discovery of the emails on his computer.

A leaked copy of "What Happened," obtained by RadarOnline.com, reveals that Abedin burst into tears and lamented that her husband, disgraced former Congressman Anthony Weiner (D-N.Y.), would "be the death" of her.

“This man is going to be the death of me!” Abedin said while “bursting into tears,” Clinton writes in her book.

“Anthony had already caused so much heartache,” Clinton adds. “And now this.”

Clinton has said in the past that she views Abedin to be a "second daughter" of sorts, so I imagine that it must have been devastating for Abedin to learn that her husband basically torched Clinton's campaign right before the election. Still, it's kind of telling that Abedin's first concern regarding the discovery of the emails is not for her husband, but rather for Clinton's campaign.