Pence Helps with Hurricane Harvey Clean Up, Meets with Victims 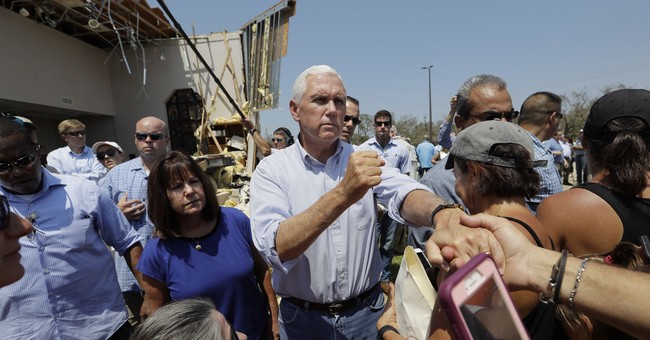 Vice President Mike Pence donned a pair of work gloves and helped out with the Hurricane Harvey cleanup on Thursday at First Baptist Church in Rockport, Texas.

Pence was seen hauling away part of a downed tree, and gave a short speech assuring the people of Texas that the Trump Administration will stand alongside them until the rebuilding is complete. Pence, who was there with other members of the cabinet as well as with Texas Gov. Greg Abbott, praised Abbot's leadership throughout the disaster and the resolve of the community for coming together to help each other even when they too were struggling.

Karen Pence then led a prayer.

And here's pictures and video of Pence and Abbott clearing out tree branches.

President Trump will return to Texas on Saturday, with First Lady Melania Trump. Trump announced on Thursday that he will be donating $1 million in personal funds towards the recovery effort.