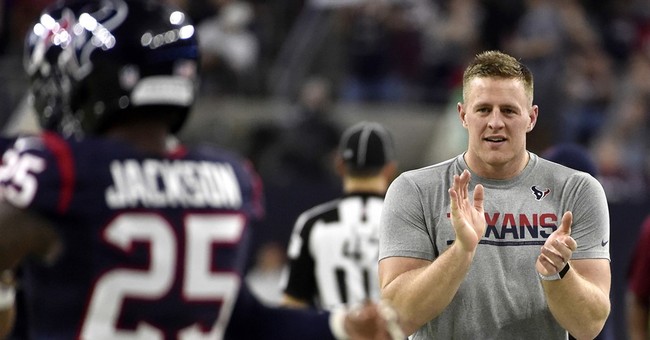 UPDATE: Holy cow. In the five hours since this piece was published, JJ Watt's fundraiser has now raised more than $4 million for the city of Houston.

JJ Watt, a defensive end for the Houston Texans, may be a native of Wisconsin, but he truly loves his adopted hometown of Houston. Shortly after Hurricane Harvey touched down, Watt set up a fundraiser to benefit the city and to assist with the recovery efforts. Watt urged people to donate whatever they could in order to help put a dent in what will certainly be a "massive" recovery.

Recovery efforts from Hurricane Harvey will be massive.
We must come together to help rebuild our communities.https://t.co/SR6DmnNbyM pic.twitter.com/iiMsG2i4dl

The initial 200k was raised in less than 2 hours.
I have now raised the goal to 500k.
Your support is phenomenal!https://t.co/SR6DmnNbyM

Hey @youcaring I think we may have broken the website. Can you please help so that we can raise as much money as possible for these folks???

On Monday, the fundraiser reached over $1 million. Watt assured donors that the money would go directly to the people of Houston, not administrative fees.

And on Tuesday, about 17 hours after reaching $1 million, and about three hours after hitting the $1.5 million milestone, over $2 million had been donated for the people of Houston. Watt said the amount of money raised was "literally unbelievable" and again raised the goal to $3 million.

Good on Watt for using his fame and football skills for good. The NFL (and sports in general) needs more people like him.