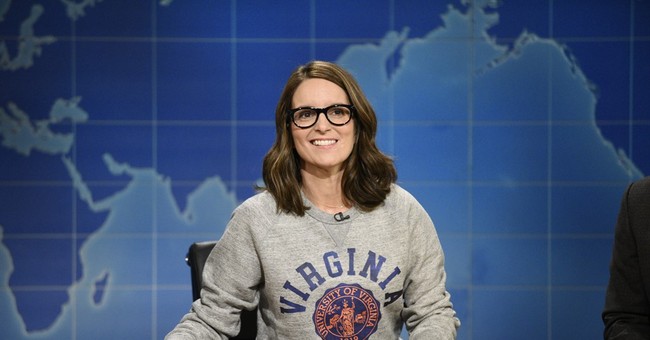 Comedian Tina Fey made a surprise appearance on Saturday Night Live's 'Weekend Update' to discuss her coping techniques in light of the recent protests. Rather than be overly angry or violent in public, Fey, a UVA alumna from the class of 1992, said that it "broke her heart" to see people protesting and being violent in Charlottesville. She then tore into President Donald Trump's response to the rallies that blamed "all sides" for the violence.

As far as the planned rallies for this weekend, Fey presented an alternative for people who may look to counter-protest: buy a cake (possibly from a minority-run bakery) with a flag on it, and eat it. Fey then proceeded to furiously eat a cake while talking about the alt-right, white nationalism, President Donald Trump, and racism.

Watch the clip below (but be warned that there is some questionable language):

Honestly, I liked the sketch. It's certainly a frustrating time for many people, and this is a more productive way to deal with anger than doing something illegal or destructive that could result in a tragedy. And besides, it's cake. Cake is delicious.

Of course, because this is the internet age and we can't laugh at anything anymore, Fey was slammed by some who suggested that she was being insensitive.

I hope Tina Fey is enjoying her sheet cake. We are marching in 100+ degree heat. #DefendDurham

a full sheet cake costs $50. donate that to @DMVBlackLives instead of eating your feelings and not showing up. https://t.co/7ZMtpE4bh6

my timeline is more eloquent about who gets to sit back and eat sheet-cake and who doesn't than I could ever be pic.twitter.com/2eSmibMLlo

If abolitionists had stayed home and eaten sheet cake, we probably would be the Confederate States of America.