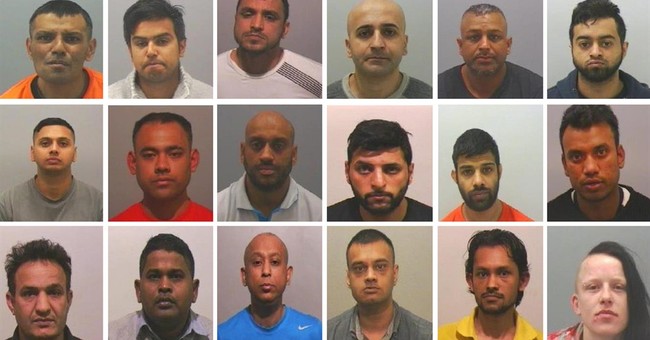 Sarah Champion, the Labour MP from Rotherham, U.K., spoke out about the recent arrest of 18 men who are accused of operating a sex exploitation ring in Newcastle. Speaking to BBC Radio 4 Today, Champion was upset that the ethnicity of the men, who were overwhelmingly British-Pakistani, went completely unmentioned by the media, and she thinks that people are more afraid of being called racist than actually protecting children from sexual assault.

Champion said that she wants the government to research as to why these kinds of crimes are almost always committed by men from the same ethnic background. She's concerned that there could be some sort of cultural issue or community acceptance of this sort of crime, and wants an investigation.

From The Independent:  (emphasis added)

Asked whether she herself would be attacked for her comments, Ms Champion replied: “Absolutely. The far-right will attack me for not doing enough and the floppy left will have a go at me for being a racist. But this isn’t racist, this is child protection. We need to be grown up about it and deal with it.

“What I’m all about is prevention. It’s all great hand-ringing after it’s happened but why has it happened? Lives are being absolutely destroyed because of this and also I have to say within my own constituency – I didn’t sleep last night coming on talking about this because I know every time I talk about it the level of Islamophobia increases." (The Independent)

Sadly, Champion wasn't wrong--a quick search of Twitter shows many people calling her a racist for pointing out the obvious fact that 17 out of the 18 men arrested in the most recent sex ring were, indeed, of British Pakistani descent. This isn't a "hate fact" or anything of the sort--it's reality. Champion did not say that all people of a certain culture are committing these kinds of crimes, rather, she said that the vast majority of people arrested for a crime are from a specific culture. There's nothing inherently wrong or racist in pointing that out, and she's right that there probably should be some sort of an investigation to figure out just what is going on in these communities that results in the victimization of so many girls. Dancing around on tiptoes because of cultural sensitivity is only going to result in more people getting victimized.

Julio Rosas
CNN Technical Director Admits What We All Knew What That Outlet Was Doing Throughout Trump's Presidency
Matt Vespa
Yes, What The Japanese Are About to Do...Is How We Got Godzilla
Matt Vespa
Republican Senators Eviscerate Biden's Decision to Withdraw Troops From Afghanistan
Reagan McCarthy
New Mexico Dem Governor Under Fire for Sexual Harassment Settlement With Former Staffer
Reagan McCarthy
Armed Citizens Protected Their Property in Minneapolis During Second Night of Rioting
Katie Pavlich
CARTOONS | AF Branco
View Cartoon
Most Popular