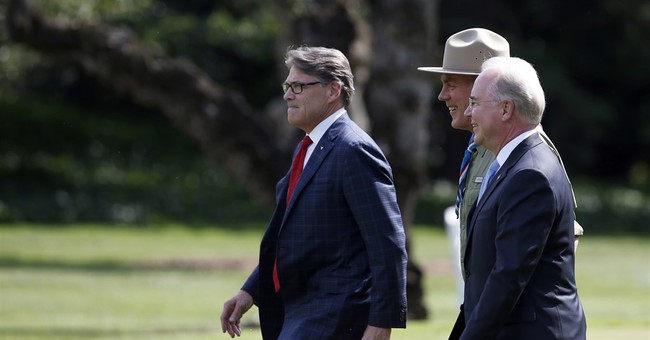 Secretary of Energy Rick Perry was pranked earlier this week by two Russians posing as the Prime Minister of Ukraine. In a telephone call, Perry believed he was speaking with Ukrainian PM Volodymyr Groysman through an interpreter, but was actually speaking to Vladimir “Vovan” Kuznetsov and Alexei “Lexus” Stolyarov. Kuznetsov and Stolyarov are two Russian hoaxers who have targeted other high-profile targets in the past, including (they claim) Sen. John McCain (R-AZ), Rep. Maxine Waters (D-CA), and Elton John.

The full conversation, which concerned energy from manure, a pipeline in the Baltic Sea, and cyberattacks, among other things, was posted on a Russian news website.

During the conversation, which was posted in its entirety on Vesti, a Russian news site, Perry was convinced he was talking to Ukrainian Prime Minister Volodymyr Groysman, who appears to speak through an interpreter. Perry talked about a potential pipeline across the Baltic Sea for Russian gas, cyberattacks on the U.S. power grid, natural-gas exploration in Ukraine and the U.S. withdrawal from the Paris climate accord.

“I hope that stepping away from the Paris accord will not have any negative impact with our relationship with the Ukraine,” Perry said. “We tried to divorce the politics from this and really just let our record stand, one that I’m very proud of.”

He also talked about a meeting scheduled for August where they would let American business executives talk about extracting oil and natural gas in Ukraine.

“What we have seen in Texas is the great increase of productivity, particularly in shale gas because of hydraulic fracturing and the directional drilling,” Perry said.

So this is slightly embarrassing, but it's not without context. Perry had previously met with Groysman in late June, and the prank call came about three weeks later. Still--maybe he should better screen his calls for the time being.