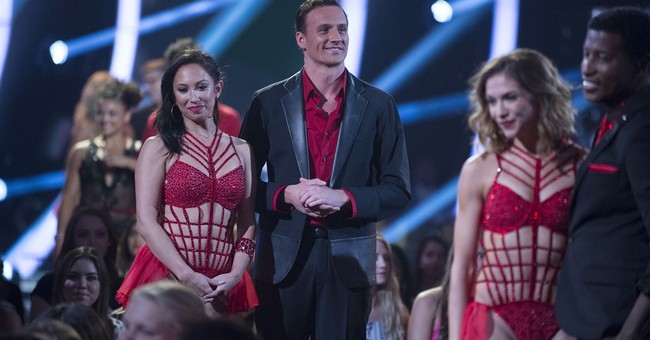 We've seen Sean Spicer show his mastery at dancing around tough questions in the White House's press briefing room--but we may soon find out how he handles dancing the Viennese waltz on the ballroom.

Former White House Press Secretary Sean Spicer stepped down from his position last week, effective at the end of August. He has no job lined up just yet, and a curious rumor courtesy of the New York Post suggests that he could be cast on the next season of "Dancing With the Stars." Spicer was seen on Wednesday in Manhattan meeting with various television networks, and an insider confirmed to Page Six that DWTS is indeed interested.

Spicer, who announced his resignation Friday, was seen coming out of high-level meetings at ABC, NBC, CBS and Fox News in Manhattan, according to sources. A source told us some news execs “made the full-court press” as they competed to woo the high-profile spokesman — who brought in solid ratings and plenty of late-night fodder — while others “just kicked the tires.”

But there’s also speculation 45-year-old Spicer’s next stop could be showing off some spicy dance moves on ABC’s “Dancing with the Stars.” Actor Zach Braff jokingly tweeted when Spicer stepped down, “Can’t wait to see Sean Spicer waltz on Dancing With the Stars.”

But a TV insider confirmed to Page Six that the dancing competition show has indeed reached out to the Beltway insider. “That has legs,” the source said.

If this (amazing) rumor turns out to be true, Spicer would be the next in a long line of politicos to dust off their dancing shoes in an effort to win the Mirrorball Trophy. Tucker Carlson, Tom DeLay, Rick Perry, and Bristol Palin have all competed on past seasons.