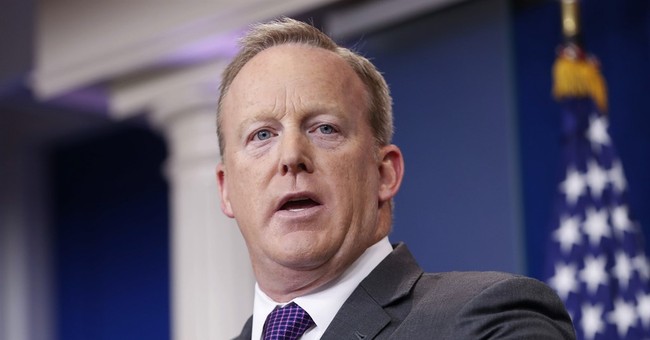 UPDATE (2:03 p.m.): On Twitter, Spicer says he's going to remain as press secretary through August. He said it has been an "honor and a privilege" to serve President Trump and the United States.

UPDATE (1:59 p.m.): Sean Spicer will appear on Hannity tonight with Reince Priebus and Anthony Scaramucci. Earlier, he told Dana Bash that he hoped to give President Trump a "clean slate."

Sean Spicer to @DanaBashCNN: "I wanted to give the president and the new team a clean slate"

BREAKING: @seanhannity will now be speaking with Sean Spicer, Reince Priebus and Anthony Scaramucci on his show tonight on FOX News https://t.co/PnA2S80yo2

UPDATE (12:45 p.m.): Despite reports to the contrary, Priebus told the Associated Press that he supports Scaramucci in his new role and that the two are "good friends."

UPDATE (12:21 p.m.): More details are beginning to emerge about the lead-up Spicer's sudden resignation. Per NBC's Katy Tur, on Thursday night Spicer was telling people that he would resign if Scaramucci was hired in the communications role. Further, White House Chief of Staff Reince Priebus is also reportedly very opposed to Scaramucci.

Spicer was telling folks last night he would resign if Scaramucci was hired. Said he didn't think Scaramucci could do the job. -source close

Spicer's once-prominent public role at the White House had effectively diminished to next to nothing in the past few weeks. The majority of the press briefings are now off-camera, and Principal Deputy White House Press Secretary Sarah Sanders has been running the briefings, not Spicer.

UPDATE: The Associated Press is also reporting that Spicer has resigned over Scaramucci's appointment.

White House Press Secretary Sean Spicer has reportedly resigned, per the NYT's Glenn Thrush. Spicer was opposed to the appointment of Anthony Scaramucci as the White House Communications director.

Why the Liberal Media Won't Be Able to Use the Horrific Buffalo Shooting to Smear Conservatives
Townhall
Eric Swalwell's 4-year-old wants to know what he's doing to help the people in Buffalo
Twitchy
Tucker Carlson Responds to Charges He Inspired Buffalo Shooter, Makes His Critics Look Like Childish Ghouls
Redstate
Put a Fork in Portland
PJ Media