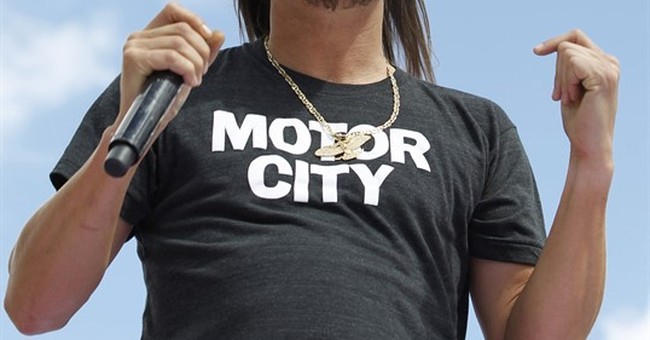 Kid Rock released another statement on Thursday saying that his new "Kid Rock for Senate" website is the real deal and is not part of a marketing campaign, hoax or any sort of joke. Additionally, he said that in lieu of writing a book during a campaign, he would be releasing music during his--and "IT ALL STARTS TONIGHT AT MIDNIGHT."

Kid Rock has not yet filed with the FEC, but he pointed out that he has 15 days to do so. He called accusations that his campaign was a joke "fake news."

UPDATE: @KidRock has posted a statement that you have all been waiting for. There is some profanity. https://t.co/3KSC5YKBKE pic.twitter.com/okPXs1Aqvz

Once again the press is wrong. First of all, I’ve got 15 days from my announcement to file paperwork with the FEC! Second, I’m not signed to Warner Bros!!! - which simple fact-checking would have revealed. I have recently worked out a unique deal with BMG, Broken Bow, CAA and Live Nation to release music ON MY TERMS. Like politicians write books during their campaigns, I'm planning on putting out music during mine and IT ALL STARTS TONIGHT AT MIDNIGHT. It's not a hoax, it's a strategy and marketing 101! No plans for an album or anything else that has been the usual norm in the music business OR politics…..and…..

Senator Stabenow and I do share a love of music, although probably not the same kind. I concede she is better at playing politics than I am so I'll keep doing what I do best, which is being a voice for tax paying, hardworking AMERICANS and letting politicians like her know that We the People are sick and tired of their bullsh-t!

“I am the captain now.” #fakenews #kidrockforsenate #kidrock #podunk #greatestshowonearth