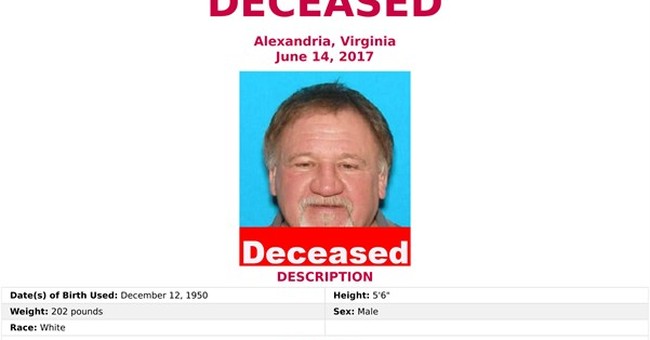 James T. Hodgkinson, the man who opened fire at the Republican's baseball practice a week ago in Alexandria, Virginia, acted alone and was not part of a terrorist organization, according to the FBI. The Bureau is investigating the incident as an "assault on a member of Congress" instead of a terrorist incident.

The FBI also confirmed that Hodgkinson had a list of six members of Congress on him at the time of the attack.

FBI: Items found on Hodgkinson included a piece of paper that contained the names of six members of Congress #AlexandriaShooting

Further, he had a bit of an obsession with the Republican Party, and had searched for things like "2017 Republican Convention" on the eve of the shooting. After the New York Times reported that the Republicans practiced baseball in a park in Alexandria, Hodgkinson went to the ball field and took pictures. (Yet, the FBI does not believe that this was "surveillance" of the scene.)

On April 12, NYT reported GOP practiced baseball at an Alexandria park. On April 15, Hodgkinson took a bunch of pictures at the park. pic.twitter.com/JTxdkWGCtw

Hodgkinson lived out of his car in Alexandria for the months leading up to the shooting. He is originally from Illinois. He was killed at the scene by members of the Capitol Police who were on House Majority Whip Scalise's security detail. His guns were purchased legally in Illinois.

It seems rather odd that the FBI is so quick to declare that this wasn't terrorism. After all, terrorism is defined as the "unlawful use of violence and intimidation, especially against civilians, in the pursuit of political aims." That's quite literally what Hodgkinson did last week in the park. He attempted to murder members of Congress with whom he disagreed. How is that not terrorism?