Reminder: The Only "Evidence" North Korea Had Against Otto Warmbier Was A Grainy Video 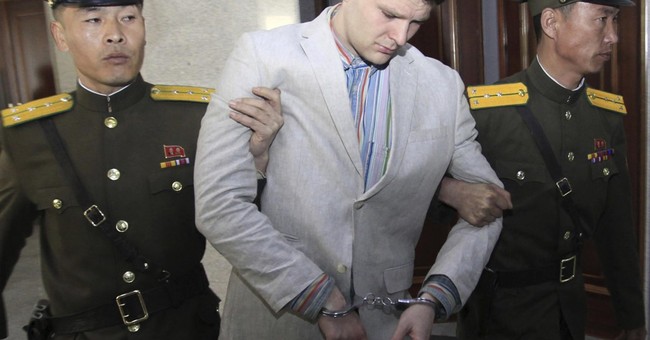 Yesterday, former UVA student Otto Warmbier passed away in Cincinnati, just days after he was medically evacuated from North Korea. Warmbier had been imprisoned in North Korea for 17 months, and was in a coma for over a year. Warmbier was sentenced to 15 years hard labor for allegedly stealing a propaganda poster from his hotel.

Despite the absolutely disproportionate punishment for a relatively minor "crime," many people (before and after Warmbier's death) couldn't help themselves but to gloat over the fact that a white, "frat bro" from an elite college was sentenced to prison.

Behold, some of the more blisteringly-hot takes:

Watch whiteness work. He wasn't a "kid" or "innocent" you can't go to another country and try to steal from them. Respect their laws https://t.co/nmpED7K2SY

"His white privilege couldn't protect him in North Korea."

Otto Warmbier plead for his freedom & life@larrywilmore: "it's just tough for me to have much sympathy for this guy & his crocodile tears" pic.twitter.com/Wgk6vCxspt

Had no idea that Otto Warmbier became a liberal villain last year while he was serving in labor camps. Disgusting. h/t @HashtagGriswold pic.twitter.com/rO7nyRLD2a

The hottest of hot takes on Otto Warmbier from @Salon. pic.twitter.com/DLVqGG2zb2

While these takes are all absurd, it's also worth noting that the only "evidence" that North Korea presented against Warmbier is a grainy video featuring a figure in a black sweatshirt. The figure's face is never visible--it's not even clear that it's a man, never mind clearly Otto Warmbier.

Still, despite this "evidence" and an obviously coerced "confession," many people decided to accept the North Korean version of events without question. Warmbier's ethnicity and Greek Life affiliation has nothing to do with the fact that he was still murdered by North Korea and left with such extensive brain damage that he couldn't see or respond to language. That's despicable. Warmbier didn't deserve this treatment, and neither do North Korean's thousands of other political prisoners.