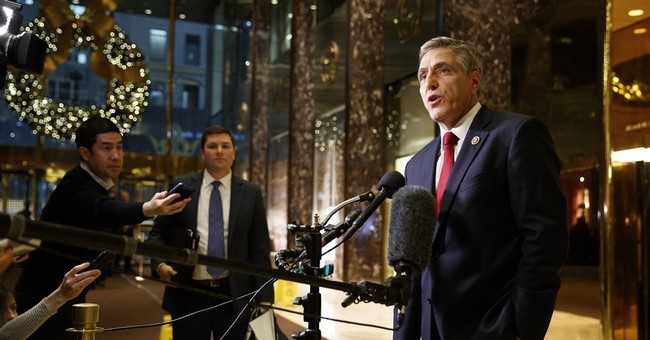 Rep. Lou Barletta (R-PA) told a Pennsylvania radio station that he thinks his colleagues in Congress should stop doing town halls with the public until the political climate becomes "more civil." Barletta spoke about how he's seen the police have to carry people out for misbehavior, and said that he was concerned for both his own safety and the safety of other people attending the forum.

"Absolutely. There's no question," Barletta answered.
He continued, "I've been at the end of some of those town halls where the police had to carry people out and I get concerned not only for your own safety, but for the safety of the people who are there, who actually come to be heard and even if you have an opposing opinion, that's great. That's what these events are for, but there's a level, you know, when people cross a line to actually inciting other people and when individual safety becomes an issue then the purpose of doing it is lost."

Of course, he's right, and it's very unfortunate. The situation has reached a boiling point, and since the election (and even beforehand), people have become completely unhinged. Politicians are still people and deserve to be treated with even a basic level of respect, even if a person may not agree with any or all of their viewpoints. Wednesday's shooting was absolutely horrific, and it should be a wake-up call to everyone. It's not okay to dehumanize people. It's not okay to promote violence and violent rhetoric about political opponents. Republicans are not evil. Neither are Democrats or Libertarians or the Greens. If anything good can come out of yesterday's horror, one must hope that it's a long self-reflection and a pledge to treat each other better.