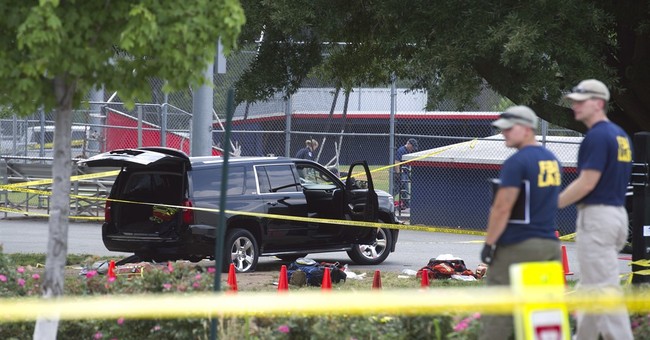 House Majority Whip Steve Scalise (R-LA) has undergone a second surgery and will likely need a third. Per his roommate, Rep. Erik Paulsen (R-MN), Scalise is still unconscious in the ICU at MedStar Washington Health Center, where he was taken after being shot in the hip on Wednesday morning.

Congressman Erik Paulsen told me this afternoon he visited Congressman Scalise in hospital. Says he had 2nd surgery and was in ICU.
— Tom Hauser (@thauserkstp) June 14, 2017

Paulsen says Scalise was unconscious and not able to talk to him. Tells me Scalise will likely need another surgery.
— Tom Hauser (@thauserkstp) June 14, 2017

Scalise is one of Paulsen's three roommates who all serve in Congress and are all members of the GOP charity baseball team.
— Tom Hauser (@thauserkstp) June 14, 2017

The shooter, James T. Hodgkinson, specifically targeted the field when he discovered that the Republicans were practicing. He is a former volunteer for Sen. Bernie Sanders (I-VT)'s campaign for president. Sanders condemned Hodgkinson after discovering that he was a supporter.