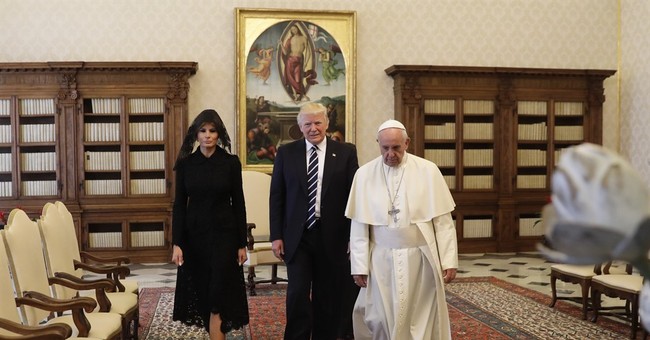 First Lady Melania Trump confirmed on Wednesday that she is Roman Catholic, making her the first Catholic resident of the White House in over 50 years when she officially moves in later this year. Questions about her religion emerged when she pulled out a rosary and had it blessed by Pope Francis when she visited the Vatican.

The Trumps were married at an Episcopal Church in Palm Beach, and Melania attended Easter services there as well, leading to confusion about her religious beliefs. Her spokesperson confirmed Wednesday that she is indeed Catholic.

That Trump even had rosary beads was news -- practicing Catholics often use the beads for prayers, moving fingers along each bead to keep track of how many times each is said, and repeated. Although Trump was raised in Slovenia, a country whose religious population is predominantly Catholic, she married Donald Trump, a Presbyterian, in 2005 at Bethesda-by-the-Sea Episcopal church in Palm Beach, Florida, and has celebrated Easter services there as recently as this year. Her 11-year-old son, Barron, who was baptized at the same church, will attend St. Andrew's Episcopal School in Potomac, Maryland, in the fall.

However, the first lady's spokeswoman, Stephanie Grisham, today confirmed to CNN that Trump is indeed Catholic.

On Twitter, Melania tweeted how she was "humbled" to meet with Pope Francis.

Today's visit with His Holiness Pope Francis @Pontifex is one I'll never forget. I was humbled by the honor. Blessings to all. pic.twitter.com/NiomkFQqJb

After meeting the pope, Trump went to a children's hospital in Rome and was pictured praying in front of a Virgin Mary statue. She also laid flowers at the feet of the statue.

It is unclear if Trump regularly attends Mass or if she plans to do so when she officially moves to D.C.