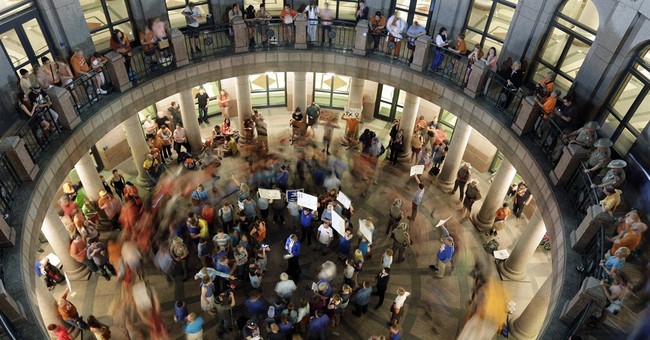 The legislation introduced by state Rep. Jessica Farrar (D) would impose a $100 civil penalty for "masturbatory emissions" that take place outside of a woman's vagina or a hospital. Each incident would be "considered an act against an unborn child, and failing to preserve the sanctity of life," the bill reads.

Farrar’s measure — which she dubbed “satirical” — would allow doctors to refuse to conduct vasectomies, write prescriptions for Viagra or perform a colonoscopy if those actions violate the doctor's personal, moral or religious beliefs. Patients would be required to wait 24 hours before a procedure is performed, and doctors would be made to read a state-printed booklet, "A Man's Right To Know," to the patient.

Doctors would also be required to perform a "medically-unnecessary digital rectal exam" and an MRI before performing vasectomies or colonoscopies or before prescribing Viagra.

In Texas, a woman must receive counseling and a sonogram prior to receiving an abortion.

While Farrar admits that the bill is meant to be satirical, it does highlight that there are in fact differences between men and women. There is no male equivalent of an abortion. Sperm has the same DNA as the man it came from. A fetus has a different DNA code because it's a separate life. A fetus is a completely formed human being. Sperm is not. Viagra is taken to fix something that isn't working properly. Birth control pills do the opposite.

While purposefully pointless bills like this one may make abortion-rights supporters cheer, all this does is make their arguments look even more ridiculous.