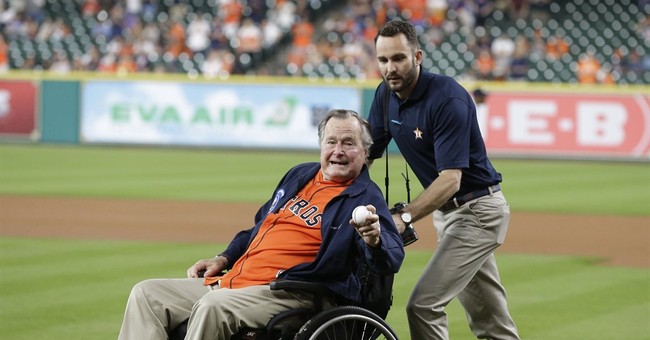 Update: The former president was moved into the ICU, where he is now "resting comfortably." Former First Lady Barbara Bush has been hospitalized as well as a precaution.

Here is our update on President and Mrs @GeorgeHWBush. pic.twitter.com/zsoIHE4FlX

Our thoughts and prayers are with the Bush family.

Former President George H.W. Bush has been hospitalized at Houston Methodist Hospital in Texas since this past Saturday, his spokesperson confirmed on Wednesday. Bush was admitted to this hospital suffering shortness of breath and is reportedly doing well and responding to treatments. He is expected to be released soon.

It's been a tumultuous couple of years for the 92-year-old former president. He suffered a fall in 2015 and fractured a bone in his neck, requiring a neck brace for several months.

On Twitter, people expressed well-wishes and prayers for his speedy recovery:

I'm sure he's praying for a #Kinder and #Gentler Nation. #ServiceToOthers #PointsOfLight

Thoughts, prayers+sending the best for Pres George H.W. Bush (41) and family as he receives treatment. He's one of our great statesmen.

Former President of the United States George H.W. Bush hospitalized for shortness of breath.
Wishing him a speedy recovery.

Sending up prayers for George H.W. Bush. He showed @walterpayton and I around The @WhiteHouse back in the 1990. pic.twitter.com/TGi98mDVYm