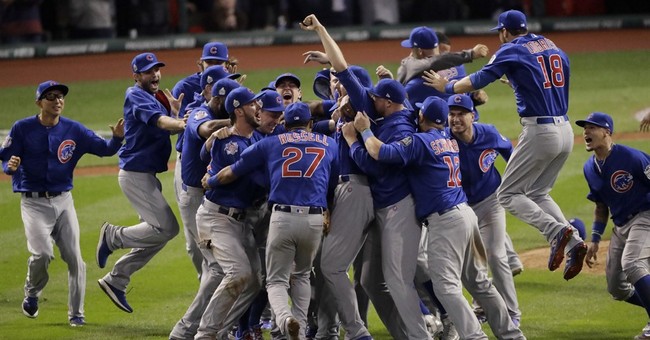 The Chicago Cubs will visit the White House to celebrate their World Series victory next week, just days before Donald Trump is inaugurated. Normally, the customary White House visit would occur during baseball season, but President Barack Obama, who claims Chicago as his hometown, invited the team to visit shortly after they won the series.

It happened: @Cubs win World Series. That's change even this South Sider can believe in. Want to come to the White House before I leave?

(Obama is a fan of the Chicago White Sox.)

The Cubs will make the trek to Washington on Monday.

Despite the fact that the visit is occurring in the off-season, most of the team and organization will be able to attend. This includes Todd Ricketts, one of the team's owners, who is also President-elect Donald Trump's pick for deputy secretary of Commerce.

A “significant majority” of the Cubs’ roster was able to travel to Washington, D.C., that day, a source familiar with the matter said. Three members of the Ricketts family, which owns the team — Tom, Laura and Todd Ricketts — will be traveling with the players to the White House. Pete Ricketts, the fourth Cubs board member, won’t be able to attend.

President-elect Donald Trump has tapped Todd Ricketts to be Deputy Secretary of Commerce. The Ricketts family traditionally has been a major backer of Republican candidates — Pete Ricketts is the Republican governor of Nebraska — with the exception of Laura Ricketts, who has been a major Democratic fund-raiser and Obama supporter.

The Obama White House had been pushing for the visit to occur before Trump is sworn in on Jan. 20, the source said.

The last time a championship team visited the White House, Obama unleashed a zinger for the ages. Let's hope he's got something equally as hilarious for the Cubs. Speaking of which--Chicago teams have done very well during the Obama presidency. In addition to this year's win by the Cubs, the Chicago Blackhawks won three Stanley Cups, including their first in nearly 50 years.

This means that the first team to visit the Trump White House will likely be the Clemson Tigers Football Team, who defeated the University of Alabama on Monday to win the College Football Playoff National Championship.