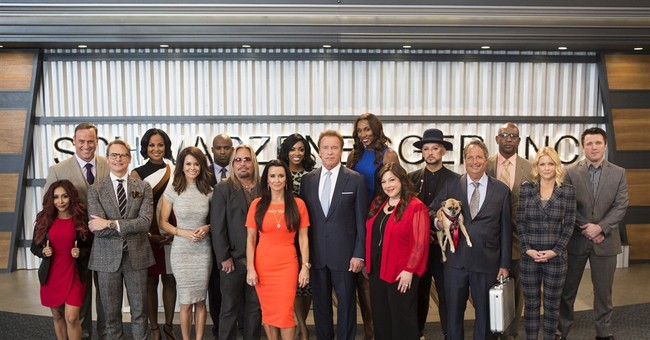 After a two-year hiatus that saw the original host be elected president of the United States, the television show "The Celebrity Apprentice" is back. Now titled "The New Celebrity Apprentice," the show is hosted by former California Gov. Arnold Schwarzenegger. Apparently, the show didn't do as well in the ratings as its predecessor, which prompted this rather petty tweet from the president-elect:

Wow, the ratings are in and Arnold Schwarzenegger got "swamped" (or destroyed) by comparison to the ratings machine, DJT. So much for....

being a movie star-and that was season 1 compared to season 14. Now compare him to my season 1. But who cares, he supported Kasich & Hillary

To Schwarzenegger's credit, his response was far more measured than Trump's comment.

There's nothing more important than the people's work, @realDonaldTrump. https://t.co/fYtAfFPMKF

I wish you the best of luck and I hope you'll work for ALL of the American people as aggressively as you worked for your ratings.

I mean, really? With all due respect to President-elect Donald Trump, what the hell was he thinking? There are roughly a zillion things more important than the ratings of a reality television show, yet this is what Trump chose to tweet about. Nobody gives a flying flip about the ratings of The New Celebrity Apprentice--the election is over. He won. He doesn't need to be doing this, and all it's doing is adding fuel to his detractors who say he's unfit for the presidency.