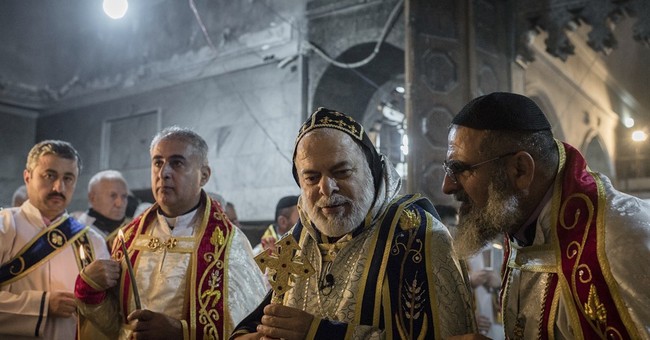 The Iraqi Christian town of Bartella was liberated in October by Iraqi forces after two years of ISIS control. After ISIS took over the town, its residents were forced to flee to camps, and various Christian religious symbols at their church were destroyed. Shortly after the town was finally freed, a video of residents making a cross for their church and ringing the church bells for the first time in years went viral.

Now, people in Bartella are celebrating their first Christmas in their church in two years. The town is only about 12 miles from Mosul, an ISIS stronghold.

Even despite ISIS desecrating their town and attempting to destroy their sacred spaces, Archbishop Timthawes al-Shamani told CNN that he believes people should forgive them and pray for them, and attempt to live in peace. The church's priest, Fr. Yaqub Saadi, said that they were celebrating Mass to show ISIS that they are not intimidated and that they will not be leaving.

"This is a message to the entire world that we Christians ... are the inherent component of this country and we are staying," said Father Yaqub Saadi.

What a tremendous story of hope in the face of unspeakable atrocities. Please keep the people of Bartella, as well as Christians throughout the Middle East, in your prayers during this holiday season.